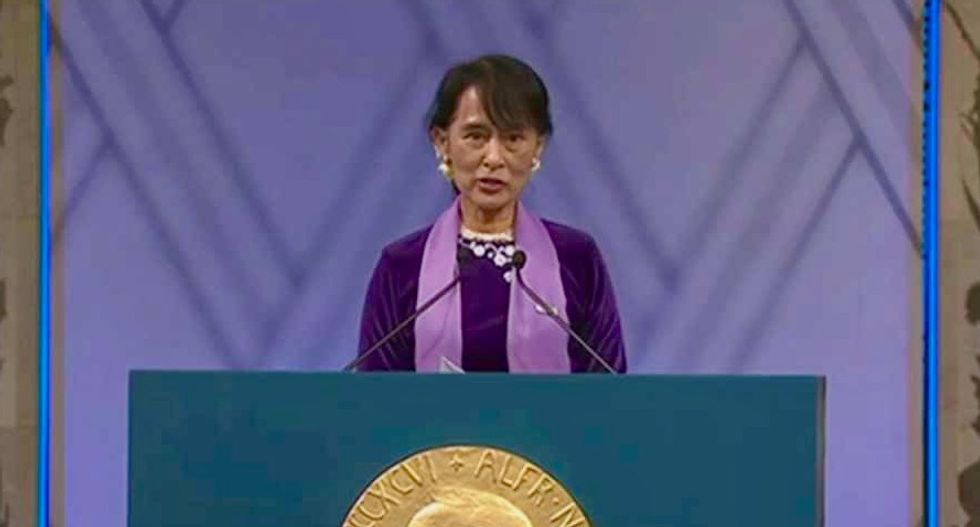 Members of the U.S. Congress said on Tuesday operations carried out against the Rohingya Muslims in Myanmar had "all the hallmarks" of ethnic cleansing, while the country's leader Aung San Suu Kyi expressed doubts about allegations of rights abuses.

The U.S. Senate members also said they were disturbed by a "violent and disproportionate" security response to Rohingya militant attacks that have driven more than 600,000 people from Myanmar to neighbouring Bangladesh.

Human rights monitors have accused Myanmar's military of atrocities, including mass rape, against the stateless Rohingya during so-called clearance operations following insurgent attacks on 30 police posts and an army base.

Myanmar's government has denied most of the claims, and the army last week said its own probe found no evidence of wrongdoing by troops.

"We are not hearing of any violations going on at the moment," Suu Kyi told reporters in response to a question about human rights abuses at the end of the Asia-Europe Meeting, or ASEM, in Myanmar's capital Naypyitaw.

"We can't say whether it has happened or not. As a responsibility of the government, we have to make sure that it won't happen."

Nobel laureate Suu Kyi said she hoped talks with Bangladesh's foreign minister this week would lead to a deal on the "safe and voluntary return" of those who have fled.

Suu Kyi's less than two-year old civilian government has faced heavy international criticism for its response to the crisis, though it has no control over the generals it has to share power with under Myanmar's transition to power after decades of military rule.

While a top UN official has described the military's actions as a textbook case of "ethnic cleansing", U.S. Secretary of State Rex Tillerson on a visit to Myanmar last week refused to label it as such.

Democratic Senator Jeff Merkley, who was among the sponsors of the legislation introduced in the Senate, led a congressional delegation that visited Rakhine this week, but was blocked from traveling to the violence-hit north of the state and to Rohingya camps.

The group also traveled to Cox's Bazar district in Bangladesh, where Rohingya refugees are huddled into makeshift camps and fed by overstretched aid agencies.

"Many refugees have suffered direct attacks including loved ones, children and husbands being killed in front of them, wives and daughters being raped, burns and other horrific injuries. This has all the hallmarks of ethnic cleansing," Merkley told reporters in Myanmar on Tuesday.

"We are profoundly disturbed by the violent and disproportionate response against the Rohingya by the military and local groups," he said.

The delegation called for Myanmar to allow an investigation into the alleged atrocities that would involve the international community.

"We want to emphasize that the world is watching," Merkley said, adding that it was important Myanmar allow anyone who wants to come back to return to their homes and their farms.

Merkley said the delegation was "not here today to recommend…what the U.S. government would do or should do," when asked about the legislation introduced in the Congress.

Myanmar officials have so far said they plan to resettle most returnees in new "model villages", rather than on the land they previously occupied, an approach the United Nations has criticized in the past as effectively creating permanent camps.

"Individuals cannot be coming back…simply to return to camps where there would be continued discrimination, restrictions on full participation in the economy and society," said Merkley.

He warned that isolating people in camps creates a "two-tier society that is fundamentally incompatible with the future of democracy and it guarantees perpetuation of suspicions and misunderstandings and conflicts."

Speaking earlier on Tuesday, Suu Kyi said discussions would be held with the Bangladesh foreign minister on Wednesday and Thursday about repatriation. Officials from both countries began talks last month on how to process the Rohingya wanting to return.

"We hope that this would result in an MOU signed quickly, which would enable us to start the safe and voluntarily return of all of those who have gone across the border," Suu Kyi said.

The Rohingya are largely stateless and many people in Myanmar view them as illegal immigrants from Bangladesh.

Suu Kyi said Myanmar would follow the framework of an agreement reached in the 1990s to cover the earlier repatriation of Rohingya, who had fled to Bangladesh to escape previous bouts of ethnic violence.

That agreement did not address the citizenship status of Rohingya, and Bangladesh has been pressing for a repatriation process that provided Rohingya with more safeguards this time.

"It's on the basis of residency...this was agreed by the two governments long time ago with success, so this will be formula we will continue to follow," Suu Kyi said.

Earlier talks between the two countries reached a broad agreement to work out a repatriation deal, but a senior Myanmar official later accused Bangladesh of dragging its feet in order to secure funding from aid agencies for hosting the refugees.