US to end protected status for Haitians in July 2019 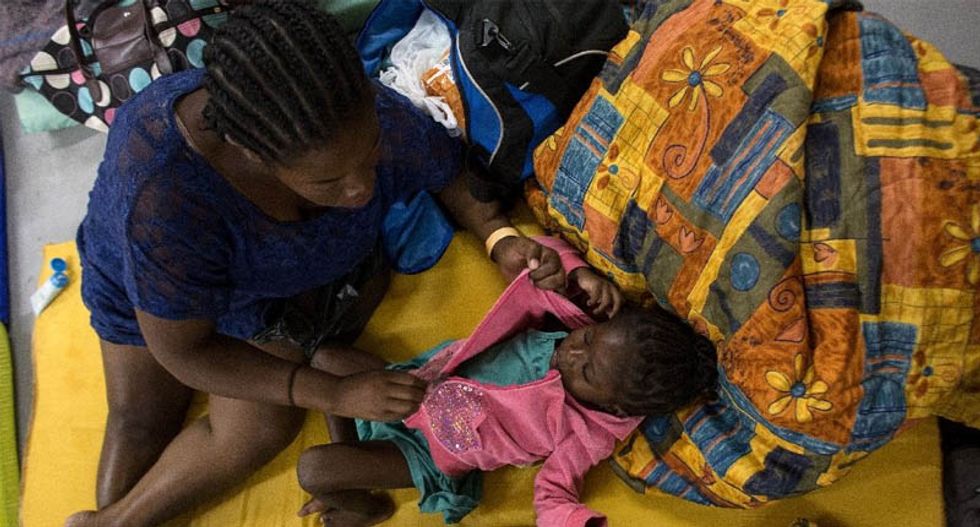 Haitian migrant Wilenda Nicolas, who seeks asylum in the United States, gets ready to sleep with three-year-old Damie at the Padre Chava soup kitchen and shelter in the Mexican border city of Tijuana, in Baja California, on October 6, 2016 (AFP Photo/Guillermo Arias)

WASHINGTON (Reuters) - The United States in July 2019 will end a special status given to about 59,000 Haitian immigrants that protects them from deportation after a devastating 2010 earthquake, senior Trump administration officials said on Monday.

The decision by acting Homeland Security Secretary Elaine Duke gives Haitians 18 months to return to their impoverished Caribbean country or legalize their status in the United States.

The Obama administration extended the status several times after the initial designation.

Duke decided to terminate the special status after a U.S. review of the conditions in Haiti found the country had made considerable progress, a senior official with President Donald Trump's administration told a briefing.

"It was assessed overall that the extraordinary but temporary conditions that served as the basis of Haiti’s most recent designation has sufficiently improved such that they no longer prevent nationals of Haiti from returning safely," the official said.

In May, then-Homeland Security Secretary John Kelly extended the status for Haitians for six months through January 2018. At the time, Kelly told reporters that TPS "is not meant to be an open-ended law but a temporary law."

The decision to end TPS for Haitians is part of Trump’s broader efforts to tighten restrictions on immigration, and comes despite calls from even some fellow Republicans to continue the relief.

Republican Senator Marco Rubio of Florida published an opinion piece in the Miami Herald on Friday urging the administration to renew Haiti’s TPS designation for another 18 months, citing ongoing natural disasters, health epidemics and security issues since the 2010 quake.

This month, Duke decided to end the status for Nicaraguan immigrants, but extended the program for Honduran immigrants until July 2018.. Thousands of Nicaraguans and Hondurans received the special status in 1999 after Hurricane Mitch devastated Central America.

The Washington Post reported that Kelly pressured Duke to end the program for Hondurans, but Duke denied the reports.