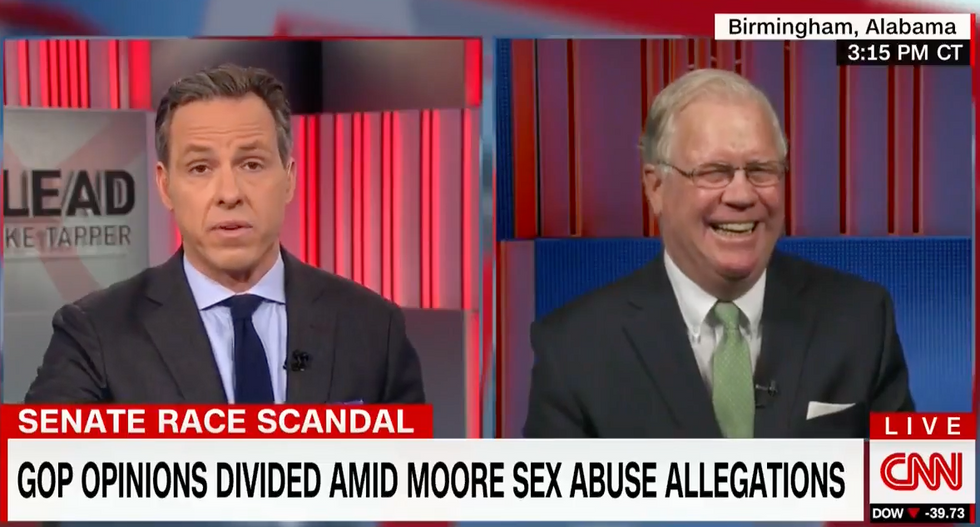 Tapper asked why the former chairman is so “skeptical” about allegations levied in the Washington Post about Moore.

“Well, first of all, I want to state something very important,” Connors said. “I’m a father of a daughter. I take these things very, very seriously.”

Tapper pointed out that women are sometimes inspired to come forward after seeing other women come forward, referring to the recent allegations levied against Harvey Weinstein, Bill O’Reilly and Louis C.K. H also pointed out that “it takes a while in many cases for women who have horrible incidents like this allegedly in their past to get the courage to come forward.”

The story in the Washington Post had 30 sources, including these four women coming on the record,” Tapper later said. “If that's not enough for you, what kind of standard or burden of proof are you looking for?”

“It's just the timing of the whole thing that really doesn't pass the smell test,” Connors said.

Connors later argued that “establishment” Republicans are urging Moore to step down because they’re “covering [their] backside.”

“You know, the Washington Post—I‘m not sure they're the most credible source for news in the state of Alabama,” he added.

“I mean I don't know why you would say that, it's one of the best newspapers in the country,” Tapper shot back.

“You're impugning the Washington Post, but what about the four women?” the CNN host. “These are four Alabama women who have similar stories about Roy Moore in his 30’s coming on to them, according to them when they were 14, 16, 17 and 18. One of the women is a [Donald] Trump supporter.

“Well, one says she's a Trump supporter,” Connors replied, before insisting he “[takes] everything they say at face value.”

“Here's a question for you, if it came down in an election between a Republican who had been proven a child molester or a Democrat, would you vote for the Democrat?” the host asked.

“I would vote against the child molester, if proven,” Connors insisted. As Tapper explained that four women have gone on the record, Connors told the CNN host to “not peddle gossip.”

“I don't think a story with 30 sources and four women making the accusations on the record is gossip,” Tapper replied.