WATCH: That time Sarah Palin thought giving an interview in front of a turkey slaughter was a good idea 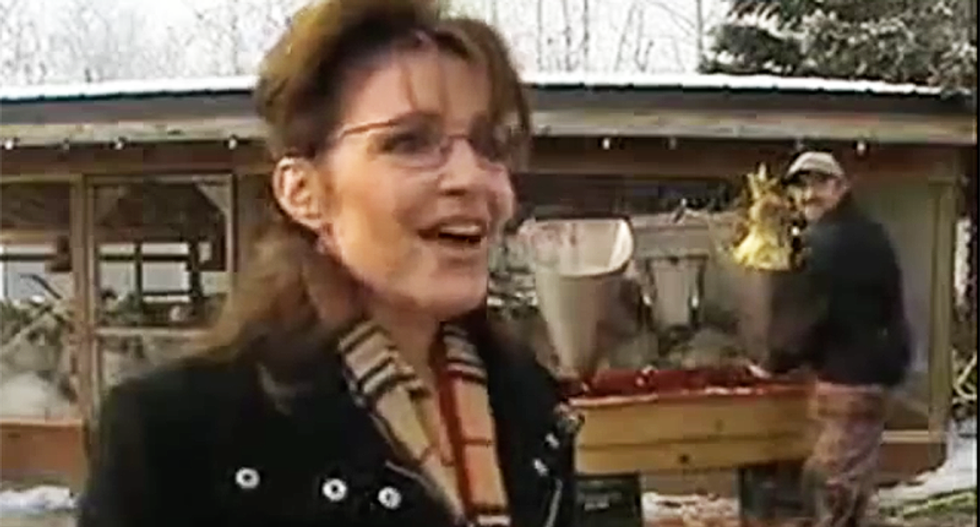 Sarah Palin talks policy while turkeys are slaughtered behind her (Photo: Screen capture)

Sarah Palin can slaughter syntax just as brutally as President Donald Trump, as adeptly demonstrated in this blast-from-the-past video from just after her election loss as Sen. John McCain’s (R-A) 2008 running mate.

While Palin walks through the important “value” of allowing businesses to progress and budget problems facing her state a large turkey struggles as a man pushes the bird’s head into a machine that promptly decapitates it. The headless turkey is then pulled from the machine as the noggin plops into a trough of blood and other turkey heads.

"Ya know, thankfully, we're in a good position, still, fiscally speaking," Palin explained, while another bird is inserted into the machine. "But it made no sense that at $140 a barrel oil lawmakers wanted to spend, spend, spend. We were warning them then, the administration was, that we had to prepare for the day that the price of oil would plummet, which, of course, it has done."

As Palin continues to comment on the price of oil and its impact on the Alaska economy, the man behind her seems to be having trouble killing the turkey. The legs of the bird shake fiercely and the man tries to adjust something around the head of the flightless bird. At one point, he looks behind him awkwardly, as if he wonders who is watching the slaughter go awry.

"Oh! Well, this was neat! I was happy to get to be invited to participate in this!" Palin said.

Watch the video below, set to the KC & Sunshine Band song "Shake Your Booty."