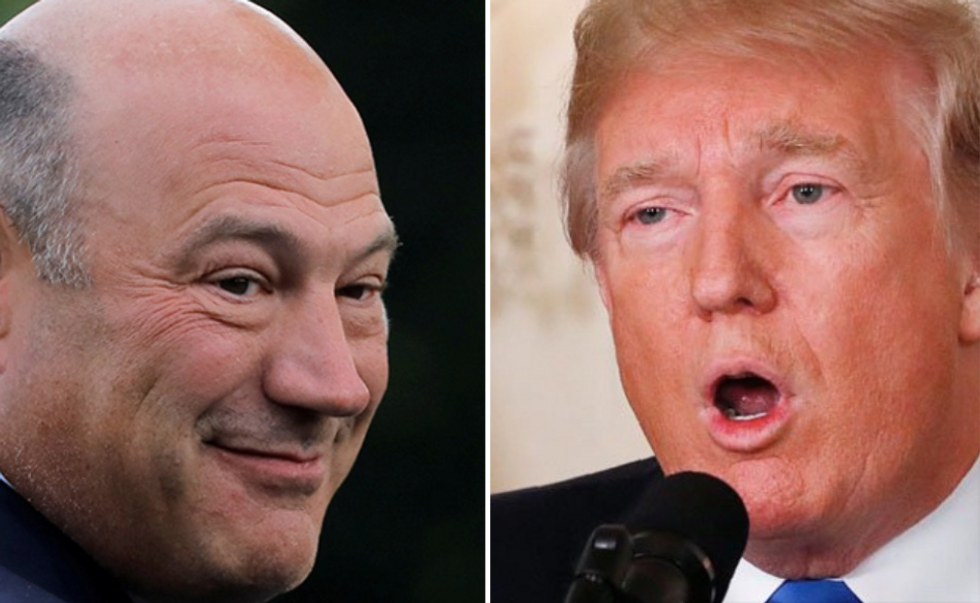 White House economic adviser Gary Cohn faked a bad phone connection in order to fool President Donald Trump into hanging up -- because it was the only way to get him to stop talking.

Sen. Tom Carper (D-DE) told CNN's Poppy Harlow and John Berman about a conference call with Cohn in which Trump rang in from Asia, then wouldn't stop talking.

Harlow asked about reporting that said Carper turned to Cohn during Trump's long-winded harangue and said, "Can't you just tell the president he's brilliant and say we're losing the conversation and hang up?"

Carper confirmed that yes, he was at a meeting with a group of Democrats, Cohn and two other White House aides when Cohn got up to take a call on his cell phone. Cohn announced that it was the president and that he'd like to join the meeting via phone.

"Which was nice," Carper said. "Nice of him to do that. Fifteen minutes later, the president's still talking. And I said to Gary, it was a room where we're all sitting around this big table, and I said, 'Gary, why don't you do this: just take the phone from, you know, your cell phone back and just say, Mr. President, you're brilliant but we're losing contact and I think we're going to lose you now, so goodbye.'"

"So you're saying Gary Cohn faked a bad connection to get the president off the phone?"

This is hardly the first story that has leaked about White House staffers treating Trump like a child. Recently his attorney Ty Cobb has reportedly been soothing Trump by reassuring him that Mueller's investigation is nearly over -- in spite of no evidence supporting such a claim.

A White House spokesman denied the incident in a statement sent to Harlow: "Senator Carper’s claim is completely false. Gary Cohn left the room and continued to speak with the President privately for several minutes before they concluded the call."