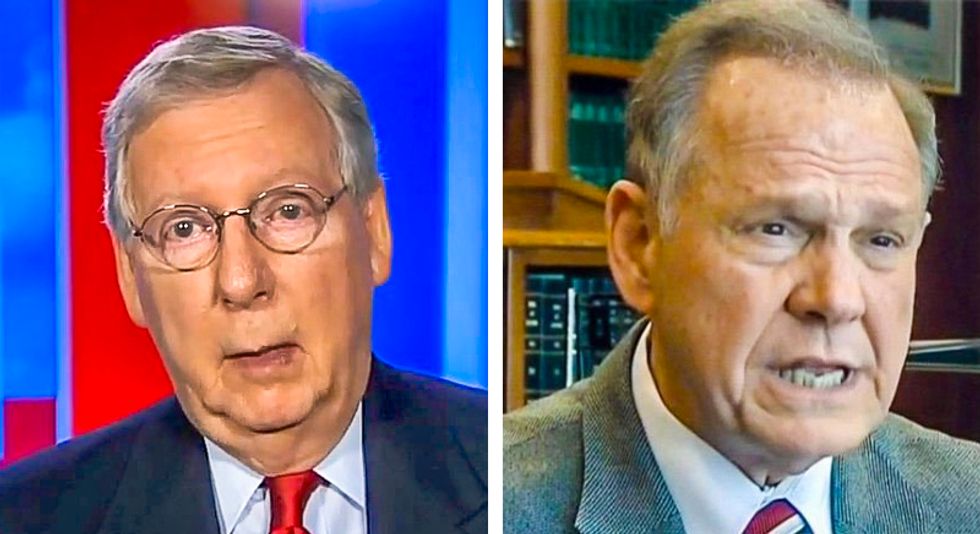 The upset victory of underdog Democrat Doug Jones in conservative Alabama has brought out a Republican firing squad gathered in a circle.

The GOP executioners want somebody, anybody, to pay for the loss of a Republican Senate seat in a state Trump won by 27 points.

The editors of the Wall Street Journal have targeted Steve Bannon, the Breitbart News publisher who persuaded Trump to go all in for Judge Roy Moore, despite clear and convincing testimony from nine women (including several Trump voters) that he had molested or propositioned them when they were teenagers.

"The Moore defeat should also be a lesson to the Republican Party, and President Trump, that many GOP voters are still at heart character voters. They will only accept so much misbehavior in a politician, no matter the policy stakes," the Journal said.

For the Wall Street Journal Republicans, the "misbehavior" embodied by Moore is doing harm to the Republican Party. “Mr. Bannon is for losers,” they proclaim.

Bannon shot back via Breitbart that Senate Majority Leader Mitch McConnell was to blame. Jones’ victory was “Mitch’s Revenge” in which "Republican saboteurs" gave away a seat to Democrats as "establishment Republicans" cheered.

The Bannonites argue that the original Washington Post story about Moore molesting a 14-year-old girl was planted by a Jeb Bush staffer and that “misbehavior” is just a cynical liberal meme to make American ungreat.

McConnell’s forces returned that volley with a fusillade of their own. Bannon's choice of candidate didn’t just harm the party; it harmed the president

“This is a brutal reminder that candidate quality matters regardless of where you are running,” declared the Senate Leadership Fund, which is controlled by McConnell. “Not only did Steve Bannon cost us a critical Senate seat in one of the most Republican states in the country, but he also dragged the President of the United States into his fiasco.”

The Alabama results will only fuel the Republican civil war now consuming the party. GOP leaders and voters now must decide: join the Bannonite insurgency and alienate conservatives who still care about the law and character, or enlist with the McConnell machine and alienate the majority of Trump voters who don’t.

Trump’s loyalty and sympathy run to Bannon, but in the wake of the Alabama defeat, he preferred to praise himself. "I was right!" he tweeted, a claim so clueless that Breitbart News quickly dropped it from its homepage.

This is likely to be Trump's message, post-Alabama: “Let’s train our fire on Mueller, not each other.”

But supporting the firing of Robert Mueller carries the same risk as supporting Roy Moore’s candidacy: alienating conservative voters who care about law and character.

These voters are by no means the majority in Trump’s Republican Party, but the Alabama results indicate they are not insignificant either. Even in a deep-red state, there is a small bloc of conservative voters who will not automatically follow Trump’s whims.

One group that is celebrating, not sniping: former pro basketball players.

Charles Barkley, the NBA All-Star who grew up outside of Birmingham, said, "This is a great night for Alabama." Steve Kerr, coach of the Golden State Warriors, echoed the University of Alabama’s victory chant.

The tide rolled against the Republicans and washed away their façade of unity.