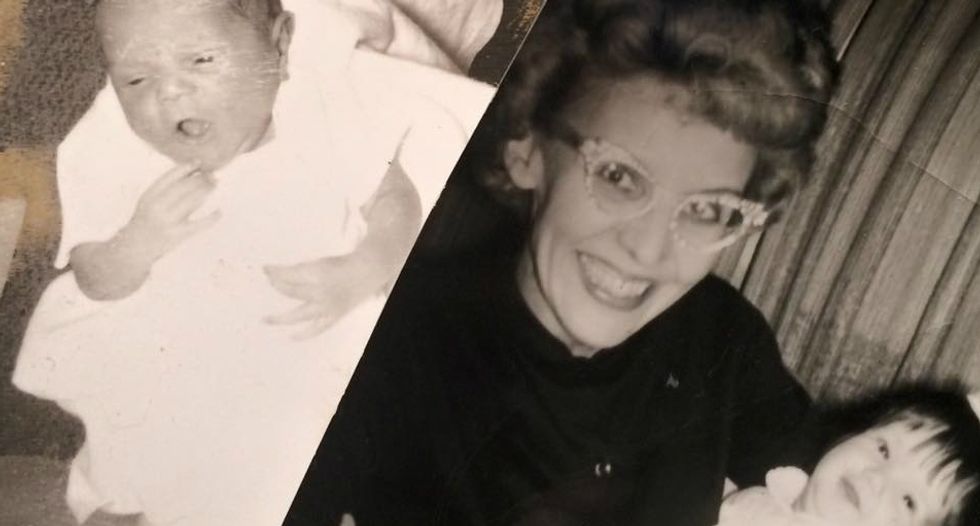 A baby snapshot of Angelle Kimberly Smith (left) and Amy Roost and her mother (right). Images via a GoFundMe posted by Roost.

A feature as part of The New York Times' Race/Related series follows the story of a white family who sent their adopted black baby back after discovering her race -- and the surprising way she and their second, white adopted daughter came together.

The story profiles the Sandberg family -- a couple who already had two adopted sons but decided they wanted a daughter. Days after she was born in 1962, she arrived at their house in the Chicago suburb of Deerfield, Illinois, only to discover the child they'd adopted was black.

The Sandbergs sent the girl back to social services after deciding they couldn't raise a black daughter -- but not due to racism. Instead, they did so because their neighborhood had experienced ample racial tensions when a developer planned on selling houses to black families earlier in the decade.

Their white adopted daughter, Amy (who now goes by the last name Roost), learned of the former adoption when she was a young girl -- and the family's secret, which had only been revealed to her once by her mother, came back into her mind after Trayvon Martin was killed by George Zimmerman in 2012.

Roost, who'd been able to use her family's wealth and privilege to work in politics, academia, nonprofits and finally journalism, sought out to find the sister she never had. In 2015, she found her -- her parents' first adopted daughter, who is now named Angelle Kimberly Smith.

Roost went into the meeting with Smith with some preconceived notions about the black experience, informed by the resurgence of racial turmoil following Martin's killing. She was surprised to learn that Smith "was really, really cool about it."

After the Sandbergs sent her back to the agency, Smith was adopted by Harry and Ruth Smith, a loving middle class black couple who lived on Chicago's South Side. She attended private school while there.

“I was raised by people that really loved me and really wanted me,” Smith, now 55, told the Times.

Her father died when she was eight and she and her mother made ends meet running the stationary store he'd owned. When she was older, she moved to Los Angeles, and despite falling into a lifestyle that led to drugs, homelessness and even prison time, she ended up getting a master's degree after turning her life around.

"Life had taken so many twists and turns that by the time she heard from Ms. Roost," the Times' John Elgion wrote, "she felt she could handle anything. She greeted the news that she had been given up by a white family by telling Ms. Roost that she held no hard feelings, and would not have wanted to be raised by white parents in a white neighborhood."

As she told Elgion, Smith was happy to have been raised in a predominantly black neighborhood, where she enjoyed some privileges (such as her family's vacation home), but where "race never felt like much of a determining factor in her life." In Deerfield, things would have been different, she believes.

"There were no people of color in that community at all,” she said. "When white people have to deal with black people, I think, there’s a misperception of who we are, what we stand for."

In learning Smith's story, Roost realized the privileges her family's wealth afforded -- the foreign vacations, the glamorous holiday parties -- might not have been so good after all. Her parents split up when she was 10, she was sexually assaulted by a family member, and her mother (who admitted in diaries to thinking about their first adopted daughter annually in April, the month she was born) struggled with alcoholism.

"When I found out she had been adopted by a black family, I assumed her life probably wasn’t as good as mine,” Roost told the Race/Related reporter. "You can look at it and think, ‘Oh, the white child probably had the better childhood in this ritzy, tony suburb. But then again, peel it back a layer and you’ll see it was a horrible childhood."

The one and only time Smith met Len Sandberg, the man who sent her back to the adoption agency against his wife's wishes because of her race, as an adult in California, she said she smiled, hugged him, and thanked him.

"'I don’t know if you’ve battled with this through the years, but you did the right thing,’” Smith told him, causing him visible relief. “I watched 50 years worth of guilt and shame roll off of him.