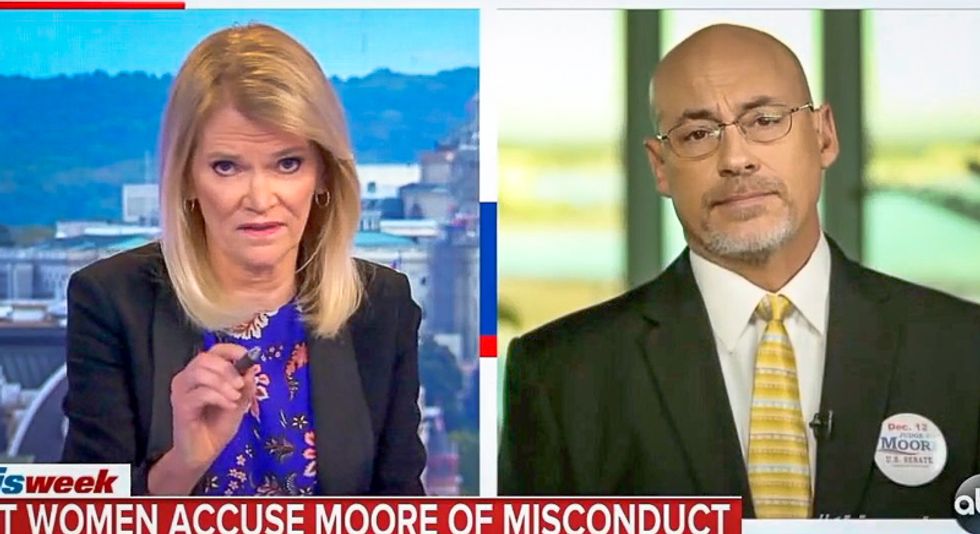 During an interview on ABC's This Week, host Martha Raddatz discounted Young's defense of Moore, noting that "the behavior he's accused of would most likely not be in front of you or anyone else."

"Their stories are falling apart," Young said of the women who have accused Moore. "[Accuser Beverly Young Nelson] told you one thing weeks ago and now -- two days ago -- she's coming out with attorney Gloria Allred's circus and saying, 'Well you know, Judge Moore didn't write all this [in her yearbook].'"

Raddatz quickly corrected the Moore surrogate: "You are talking about Beverly Young Nelson who alleges Moore groped her and bruised her next in the late 1970s when she was 16 years old. And as evidence of knowing him, she has been showing an inscription Moore made in her high school yearbook before the alleged assault."

Nelson later explained that she had made notes under Moore's yearbook inscription, causing conservatives to label her as a liar.

"Does that mean the rest of it is a forgery?" Raddatz asked Young.

"Well, let's just put it this way," Young opined. "Somebody is not telling the truth and it's not Judge Moore. Everybody in Alabama has known that Judge Moore has been telling the truth the whole time. And this is absolutely proof that this woman went on TV -- national TV with Gloria Allred of all people, somebody from California trying to influence the elections in Alabama -- went on TV and told the whole world that Judge Moore wrote all that and now she's coming back three days before the election and saying, 'I'm wrong. He didn't write all of that.'"

Raddatz pushed back, observing that the Washington Post had spoken to "eight people talking about some sort of inappropriate behavior or flat-out assault."

"Do you think these women all just made it up?" the ABC host pressed. "Women in the Washington Post story didn't even know each other."

Young contended that Moore's accusers had "come out of the woodwork."

"You are calling Leigh Corfman a liar?" Raddatz asked, referring to a woman who accused Moore of sexually assaulting her when she was 14.

"I'm saying Leigh Corfman is not telling the truth," Young snapped. "This fake narrative about Judge Moore that the people of Alabama have been putting up with for three or four weeks is falling apart in front of y'all's eyes. And he will be the next senator from Alabama and he will go up and help Trump."

Raddatz refused to let Young dismiss the charges against Moore so easily.

"That yearbook, they have said that's evidence," she said. "And 30 other people backed up those eight women in the Washington Post story."