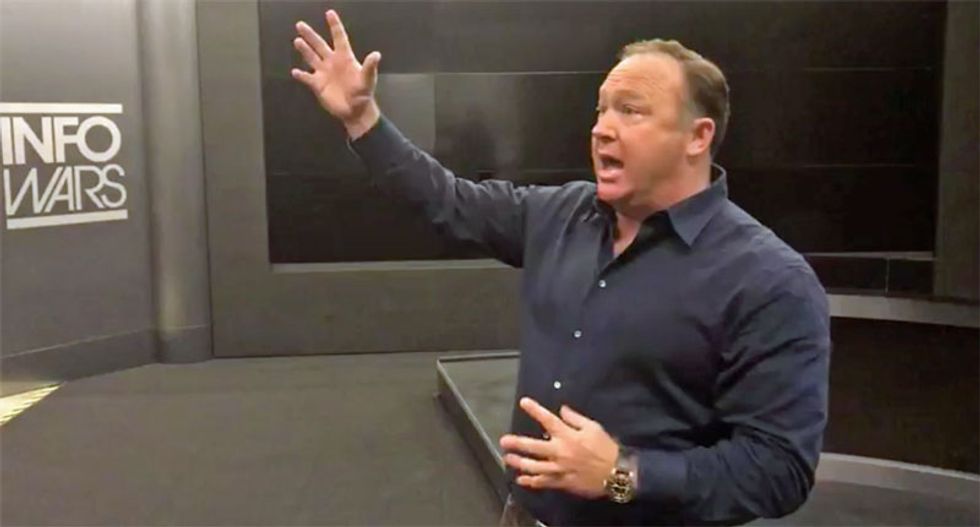 "I wanted you to get a first look at our new mega-studio "This will be a great weapon in the battle against the globalists, because we are the Resistance," Jones argued. "Though, I have to admit, it looks like a piece of Imperial hardware, doesn't it?"

"Mainstream media may be dying -- mainstream news, because they've been exposed to be fake, the CNNs, the MSNBCs," Jones argued.

"Where they really still are brainwashing a large segment of the population is entertainment," Jones claimed. "It's pretty much a unified anti-family, globalist message."

"They want atomized, broken up, sharecropper-slaves that owe that soul to the modern company store," Jones claimed. "It's feudalism -- modern, high-tech feudalism and they admit that in their own white papers."

Jones biggest criticism seemed to be that women were in command of the Resistance, though he also ranted about the fact the bad guys were men.

He claimed that deceased star Carrie Fisher "looked like an old lizard that lived under a bridge or something, that could hard talk."

"And a lot of people love their servitude, they like being brainwashed, so if people are into this crap and you like the social engineering and you like Communist China working with the globalists to keep our taxes high," Jones ranted.

Gov. Ron DeSantis (R-FL) founded the Florida Office of Election Crimes and Security and their first act was to arrest 20 people who voted because they thought that the new law allowing almost all felons to vote gave them the right to cast a ballot. Most of the charges against those people didn't stick because the crime is "knowingly" casting a ballot when you know you can't.

But one person that was caught during the DeSantis crackdown was Republican Nathan Hart. His trial unfolded last week, but not for voter fraud charges, said the Tampa Bay Times.