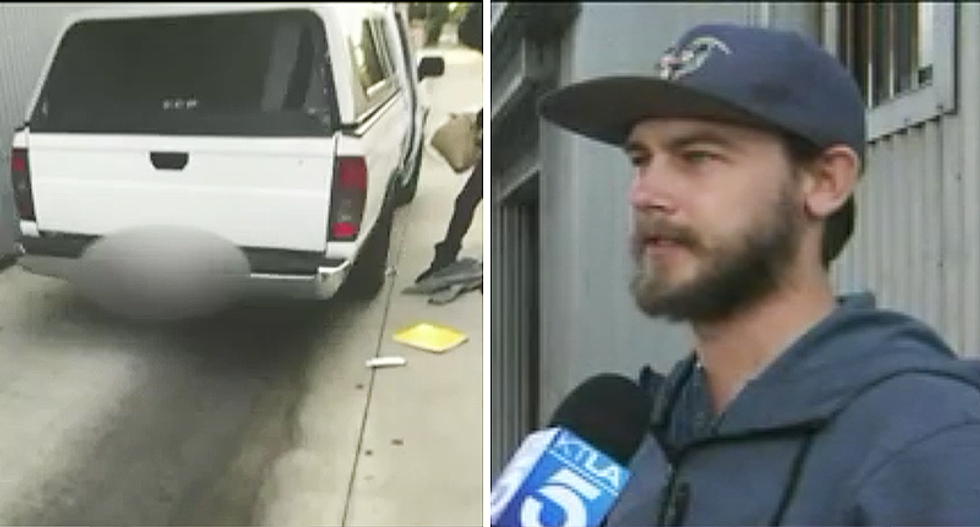 Monday afternoon Santa Ana police were able to stop a rape attempt thanks to a good Samaritan who was concerned for a woman's wellbeing.

According to KTLA news, a man had offered to drive the victim to her local Wells Fargo Bank. When she got into the car he told her that he wanted to have sex with her. When she refused he drove to the alley and duct-taped her head.

Taylor O'Neill was trying to get to work when he saw the truck blocking his way. He honked several times but the truck didn't move. So, he got out of his car to confront the man. That's when heard screams and saw the alleged victim inside.

"I saw her with her face duct-taped and him on top of her choking her," he told KTLA. "That's when I tried to open the door and banged on the window to get her out of there, get her safe, and deal with him later."

With the driver distracted, the woman was able to unlock the door and escape. The driver attempted to flee the scene but not before O'Neill snapped a photo of the truck, complete with the license plate number. He stayed with the "really scared" victim until police could arrive.

They were able to find suspect 27-year-old Jorge Alejandro Cruz de Armas and arrested him Wednesday. He's expected to be charged with "assault with the intent to rape" and "attempted rape by force or fear."

In a press release from the police department, O'Neill was referred to as a "good Samaritan" for stopping the attempted rape. Cpl. Anthony Bertagna revealed that the perpetrator put the victim into a chokehold and attempted to strangle her while covering her mouth with duct tape. They believe she likely passed out because she didn't remember having the duct tape put on her face.

Police believe the accused may have done this before because the crime was "methodical and precise."

Watch the report below via KTLA: