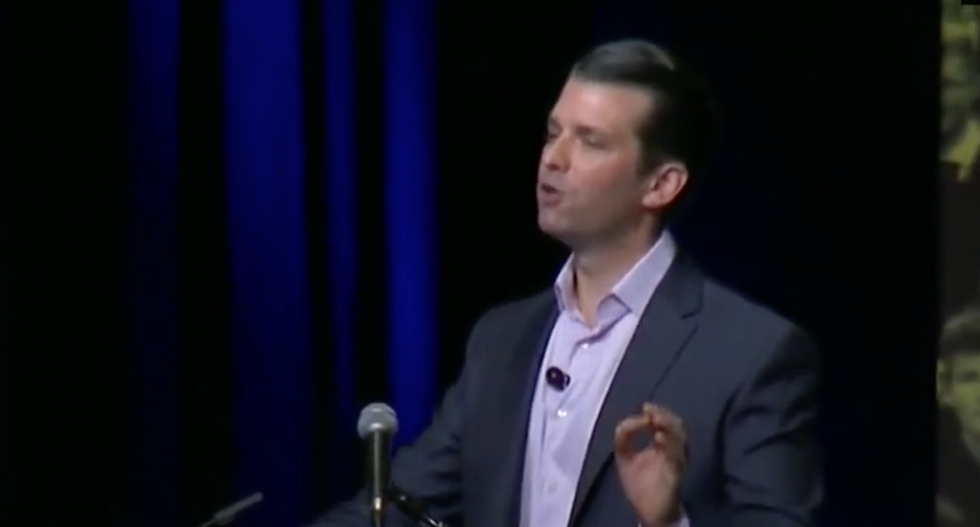 Speaking before a group of conservative college student activists in West Palm Beach, FL on Tuesday, Donald Trump Jr. stoked conspiracies about the nature of the FBI’s investigation into his father, Donald Trump, arguing “there are people at the highest levels of government that don’t want to let American be America.”

Trump Jr. himself is an integral part of special counsel Robert Mueller’s investigation into the Trump campaign. The eldest Trump son, along with Trump’s son-in-law Jared Kushner and former campaign chairman Paul Manafort, met in 2016 with a Russia lawyer who promised dirt on Hillary Clinton. In an email to publicist Rob Goldstone offering up the damaging information, Trump Jr. wrote, “if it’s what you say, I love it.” Trump Jr. was forced to clarify public remarks about that meeting three times as further information was revealed.

Despite mounting evidence that Trump Jr. and the Trump campaign welcomed interference from Russia on behalf of their campaign, Trump’s eldest son offered a thought experiment to the conservative group in an effort to illustrate the alleged bias the triggered Mueller’s investigation. He paid particular attention to reports that Mueller reassigned an FBI agent who’d criticized Trump in text messages.

“Imagine what would happen if we rolled back the clock to 2008 and a conservative director of the FBI and high-up people in the FBI that were leading all of these investigations wrote an e-mail about an insurance policy, the dossier, in the unlikely event that Barack Obama was elected president?” Trump Jr. said. “What do you think would happen?”

“Do you think the media would cover that?” Trump Jr. asked. “Yeah. Do you think it would be brushed under the rug, like, ‘Oh, it's nothing, it doesn't mean anything?’ There would be revolution in the streets.”

“You know, my father talked about a rigged system throughout the campaign, and people are like, ‘Oh, what are you talking about?’ But it is. And you're seeing it. There is and there are people at the highest levels of government that don't want to let America be America.”