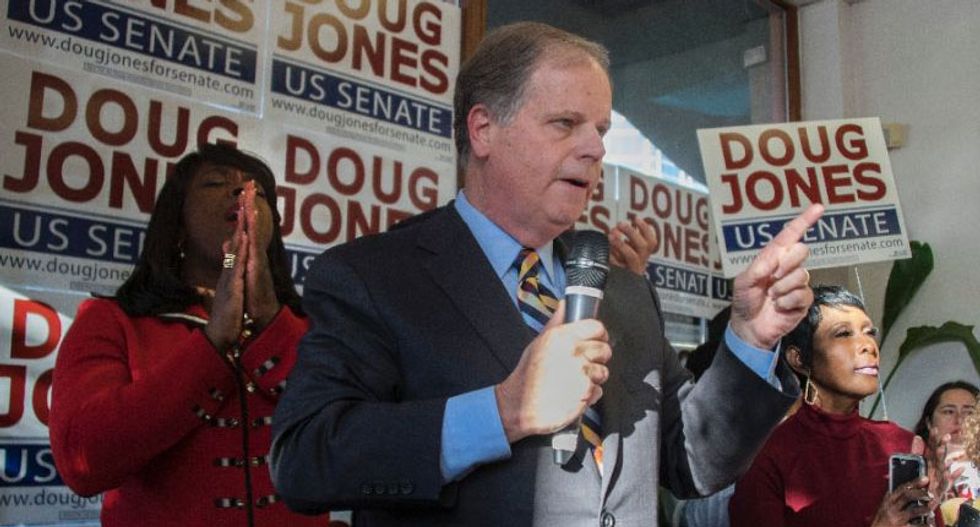 Doug Jones’ convincing victory in Alabama is a hallelujah (and Hanukkah) moment for Americans who refuse to truckle under to the vicious, knuckleheaded maniac in the White House — not for one reason but for every decent reason a democratic majority can muster.

But the Jones tide that washed over Alabama is more than cause for a day of exuberance. It points toward a solution for the wrecking-ball tendencies that have afflicted the Democrats since the election — and before.

Jones’ victory speech theme was “common ground.” What’s been so heatedly in dispute for Democrats — not just in 2016 but back to Jimmy Carter if not time immemorial — is how to decode those rarely-quite-magic-enough words. Do they mean “work with Republicans,” as exemplified in Barack Obama’s attempts to finesse American polarization with an audaciously good-natured hope that sweet reason would parcel together decent compromises? Do they mean “stronger together,” Hillary Clinton’s diversity mantra that aimed to acknowledge ethnic and racial differences while appealing to federation ? Do they mean the economic populism of Bernie Sanders and Elizabeth Warren?

Doug Jones’ “common ground” is Barack Obama’s “we” of “yes we can.” Obama’s great victory of 2008 was, among other things, a tribute to his skillful rhetoric as well as a result of George W. Bush’s egregiousness. Obama’s crucial flaw was in failing to recognize that the we who had elected him had to be kept active; had to be tended and encouraged; had to stay mobilized if his presidency was to be (in the words of organizer Marshall Ganz) transformational and not merely transactional. After Obama’s triumph, the grass roots were left to wither. Obama for America’s 13-million strong email list was abandoned, a dead letter. The energies unleashed to carry Obama into power needed constant replenishment; instead, they were left in the dust as deals were slowly made among the big players (insurance companies, Big Pharma, hospitals) to cobble together an Affordable Care Act that left so many boats unrocked and the Republicans refused to play along. The Democratic Party creaked on, a feckless fundraising shell.

In a complicated country, the road to victory for equality and freedom passes through many way stations. Doug Jones would not have gotten the nomination in California or Massachusetts — nor would Elizabeth Warren or Bernie Sanders be viable candidates in Alabama. This most obvious of truths is so obvious it’s often enough forgotten: If the Democratic Party is not a big tent, it will be crushed again and again by white supremacists and plutocrats in populist clothing.

Doug Jones also mobilized the power of compelling vagueness — like most successful politicians. (“Constructive ambiguity” is a blander synonym.) Jones’ common ground roped in resistance to the menaces facing people of color, young people revolted by flagrant and crazy lies, and women insistent upon their right to choose. The nightmare prospect of Sen. Roy Moore galloping all over Capitol Hill seems to have helped coax 26 percent of anti-choice voters to vote for a straightforwardly pro-choice Democrat. He also promoted business-centered development, not the sort of thing to get left populists’ blood running, but he wasn’t running for head of Democratic Socialists of America.

We’ve yet to see what “common ground” means when the Senate votes on plutocratic and science-denying questions. But the starting point is: Jones is one less sure vote for the Republican Party of Trump and McConnell.

What’s clear is this: Jones won by arousing a decency coalition chiefly composed of African-Americans (who, mobilized by the NAACP and Democrats, among other groups, turned out in greater force than they did for Obama!); an unusually robust minority of college-educated women (still a minority but still many more than usual); and young voters, perhaps tired of being viewed as retrograde wackos by coastal cosmopolitans.

Though there’s no way to prove it, intuition tells me the feminist writer and policy researcher Kathleen Geier is right when she tells me that the #MeToo movement deserves huge credit:

[T]here’s no way Moore would have lost if those women hadn’t come forward [to speak to The Washington Post reporters about Moore’s depredations.] And they would not have come forward without #MeToo. The Moore rumors were floating around Alabama for years and years but reporters weren’t able to nail the story until the women spoke out.

There were left-wing bitter-enders who chose to breathe the fumes of Ralph Nader and Jill Stein by choosing to blind themselves to the stark differences between the prosecutor of two Klansmen who blew up Birmingham’s 16th Street Baptist Church and the predator who cruised the Gadsden Mall hunting for young flesh. Thank God there were few such purists. Now they can go back to work counting angels on heavenly pins.

For the rest of us, wise Democrats can now see their way clear to wheel away from the circular firing squad formation and get back to work registering voters and putting turnout infrastructure to work for 2018, which is hurtling out of the future toward us.

And speaking of the future, a note: this is my last column for the no-longer-to-be BillMoyers.com. It’s been a privilege over the past year and a half to occupy this corner, where I could do my bit for the inspirational resistance and the needed reconstruction to come. My deep thanks to Bill, Kristin Miller and their collaborators for hosting me. I hope to find you, readers, and you me, on other platforms during the difficult months and years to come.