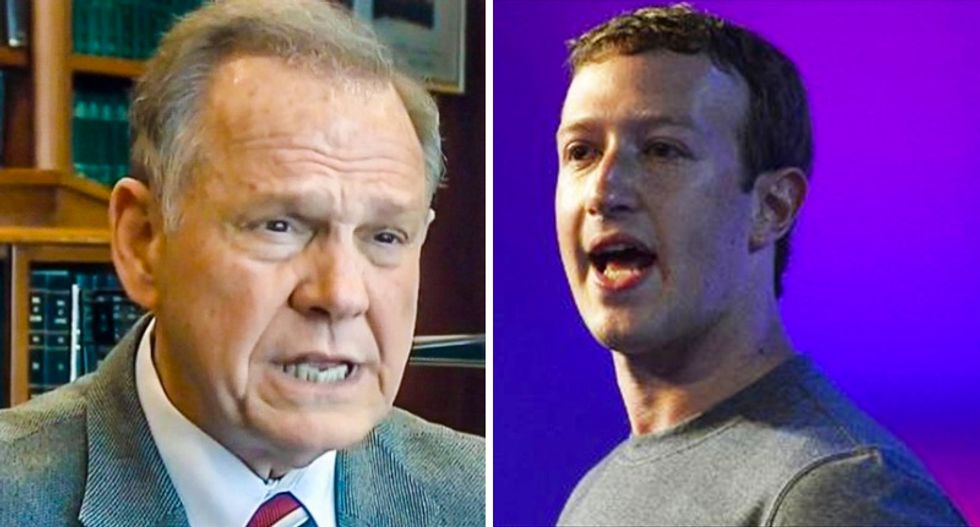 Just months after Facebook executives sought forgiveness with elected officials over the fake news and thousands of dollars in Russian political ads, it's happening again.

A report from the Daily Beast revealed Monday that Alabama senate candidate Roy More is benefiting from Facebook ads from a group called the America First Action. However, no one can seem to pin down where the group is headquartered — or any other details.

A website for the America First Action Committee lists Florida and North Carolina lawyer Omer Causey as it's founder. 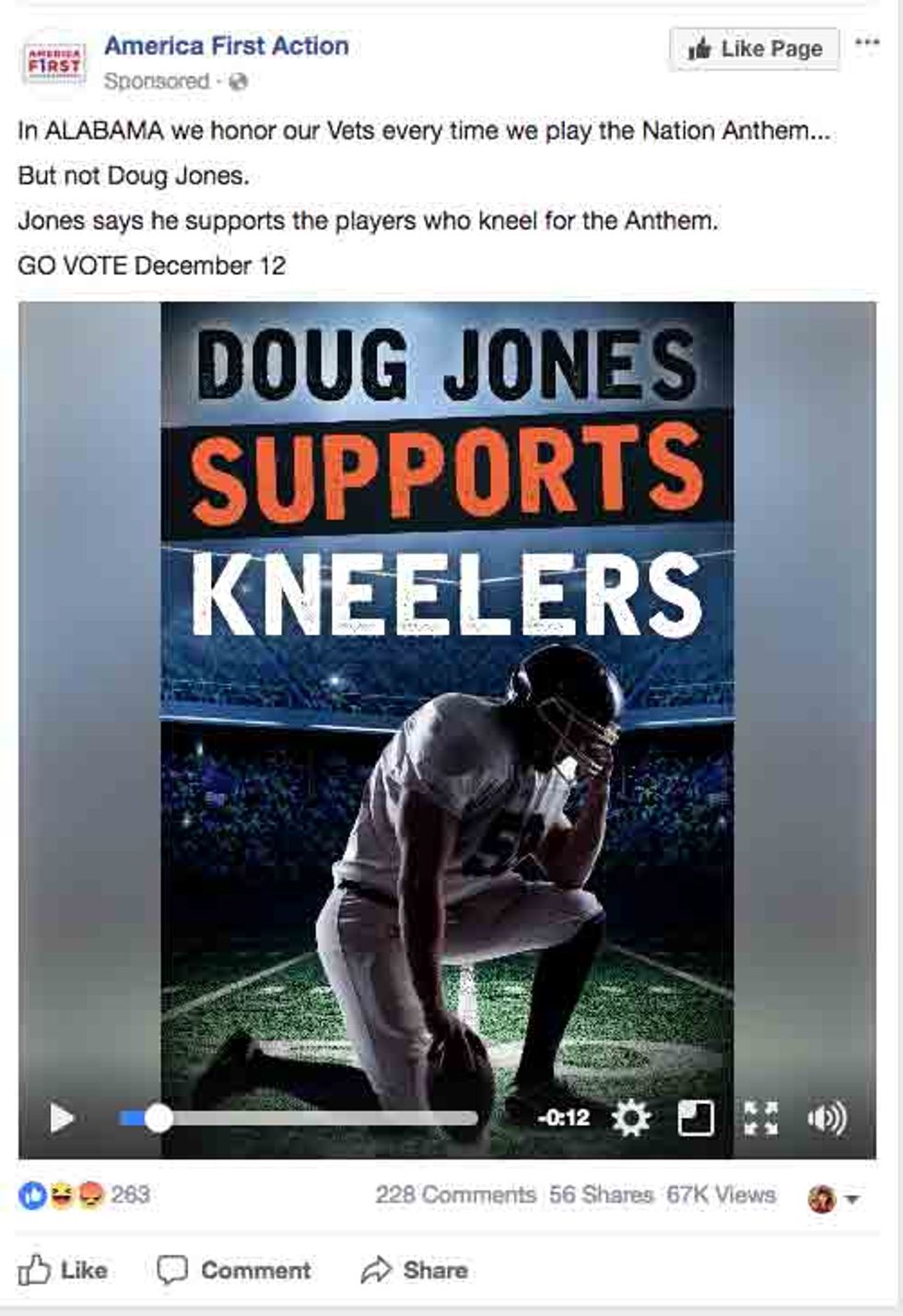 (Screen captures from the Daily Beast)[/caption]

“In ALABAMA we honor our Vets every time we play the Nation Anthem,” one ad reads, misspelling “national anthem," The Beast details. The other shows a puppet master dangling the strings attacked to Doug Jones. It claims that he will be a puppet of House Minority Leader Nancy Pelosi. As a fact check, Jones is running for the U.S. Senate and Pelosi serves in the House. 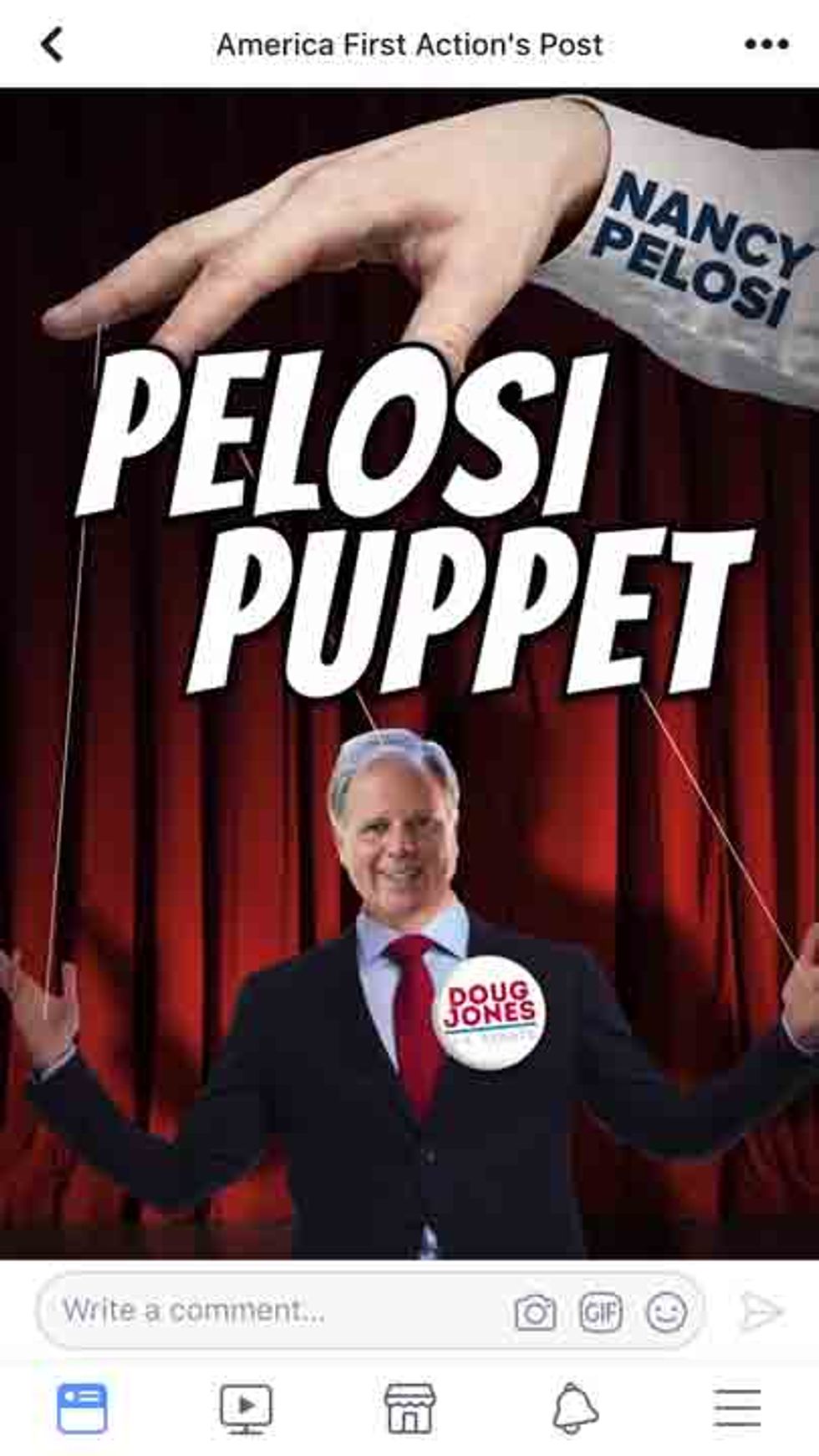 “The ad campaign is ridiculous by itself, but there’s nothing that makes my skin crawl more than hearing ‘Alabamans’ instead of ‘Alabamians,’” Alabama resident Yvonne Trosclair told The Beast. “It’s the first thing they say.”

Those living in the state have been bombarded with the pro-Trump PAC's $1 million ad buy on social media. The blanket ad to every person in Alabama seems to have prompted users to rate the PAC's site with a 1.7 rating out of 5.

“They’re clearly not from the state if they’re not saying Alabamians,” she explained.

There's no identifying information about who America First Action is, where it's located or who is behind it. Those are part of the disclosures that Facebook founder Mark Zuckerberg promised would be fixed in wake of the 2016 election. According to FEC documents, the group is based at 1400 Crystal Drive in Arlington, Virginia.

The same address is listed by employers like Allied Telecon, The American Intellectual Property Law Association, a cybersecurity firm named Millennium Corp, the Society Of Chemical Manufacturers & Affiliates, the National Grain and Feed Association, Numbersusa.com and a few private law firms. However, that reverse address search didn't show the PAC listed anywhere in the building.

Zuckerberg outlined a plan for stopping external forces from impacting American elections. During 2016 a Russian "troll farm" in St. Petersburg targeted millions of Americans with hundreds of thousands of dollars in pro-Trump ads in swing states.

“You still don't know if you're seeing the same messages as everyone else. So we're going to bring Facebook to an even higher standard of transparency,” Zuckerberg noted during a Facebook Live video in September. “Not only will you have to disclose which page paid for an ad, but we will also make it so you can visit an advertiser's page and see the ads they're currently running to any audience on Facebook.”

He swore the new standard for transparency would "roll out over the coming months." Clearly, it has not as evidenced by the pro-Roy Moore PACs like America First Action and a group supporting Doug Jones named Alabama Values.

The only information available through Facebook was a page a user is taken to when one clicks "Why am I seeing this ad?" It includes nothing more than the group's name, keywords identifying who the audience targets and what the interest is for the page. 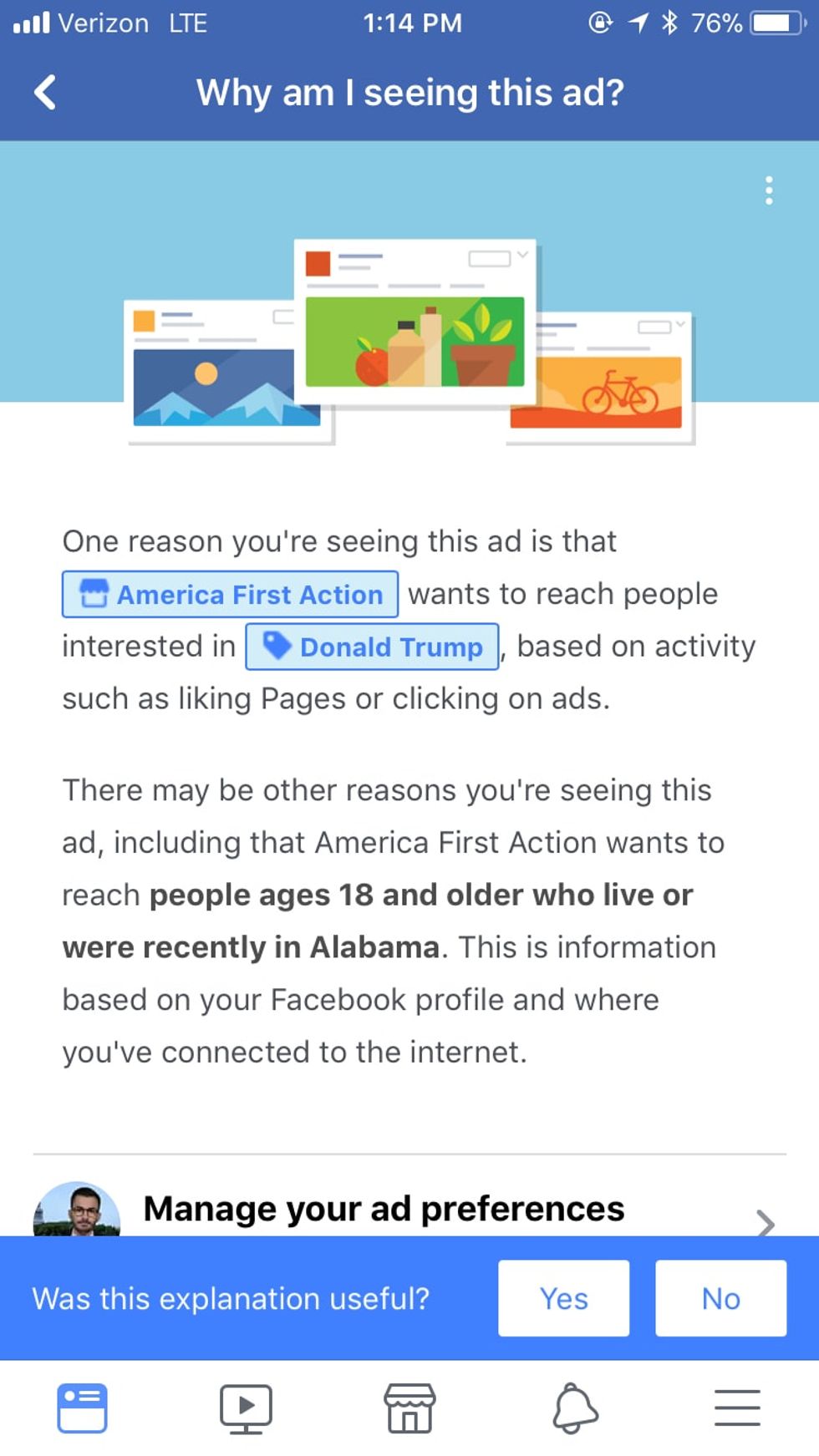 Trosclair had developed her own response with an eye-rolling graphic she's hashtagged #YouDontKnowUs.

UPDATE: While NumbersUSA is located in the building, as correctly reported, the organization contacted Raw Story with the following statement.