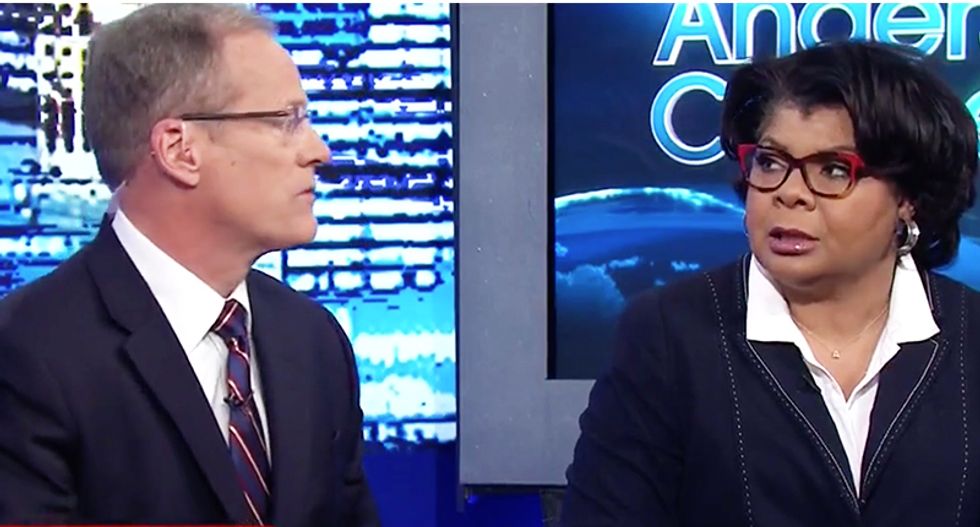 Powers began by disputing the conservative narrative that forcing Sen. Al Franken (D-MN) out was purely political and that Democrats were attempting to regain the moral high ground. In fact, Politico reported that the movement came from female senators, some of whom have faced sexual harassment themselves at the Capitol.

Democratic political strategist Paul Begala explained that the Democratic Party is the party of women. He cited the last seven presidential elections Democrats won the women's vote "every single time" for 25 years. As the "party of women," Democrats had a duty to represent the women who elect them.

Former Rep. Jack Kingston (R-GA) argued "both parties" are bad and thus it's a wash. He cited historic problems Democrats have faced with male behavior and Powers asked about current examples for Republicans.

"What about Donald Trump and Roy Moore?" she asked.

"I think in terms of Roy Moore, he is denying it," Kingston said, using a GOP talking point.

Powers retorted that Franken denied it as well, including in his announcement speech Thursday. She noted there was one photo from years ago and 7 other accusations that he has denied.

"You know, I think the Democratic Party has to make their decision on that, I think what's happening with Roy Moore, the Republican Party, it's a little bit different," Kingston attempted to explain. "This happened 40 years ago, two of these women may not be credible, two of them may not be."

Urban Radio's April Ryan noted that these weren't woman, they were children.

"Jack come on!" Powers said. The rest of the panelists quoted that others were 16 years old.

"It's interesting with Roy Moore, he's the only one that has a record of lying in court," host Anderson Cooper said in defense of the women Kingston was alleging were lying. "The judges kicked him out the second time, as the Chief Justice in Alabama, because he was, it was a unanimous option of the judges, for misleading, misrepresenting what he had actually done. It's interesting that people don't believe these women, but it's actually Moore who has a track record of not being believed in court."