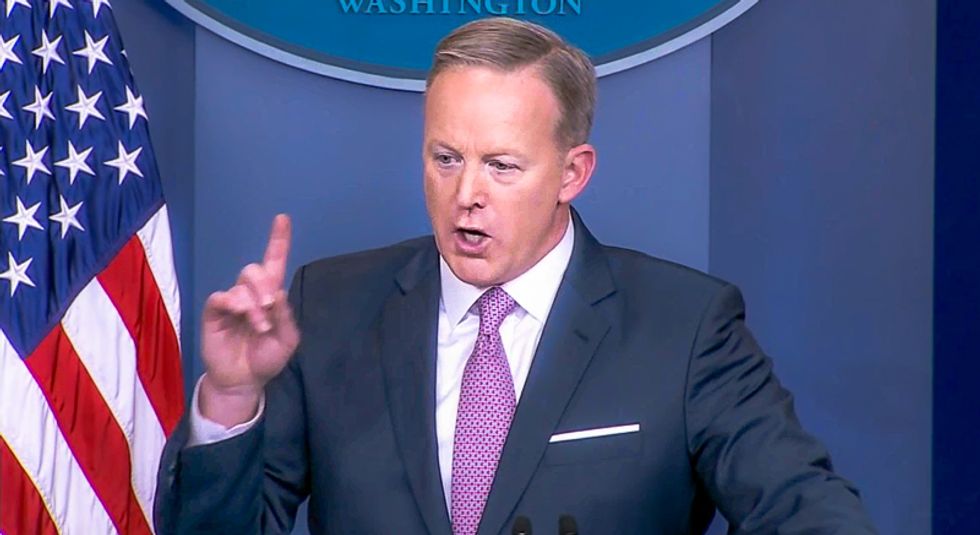 Former White House Press Secretary Sean Spicer reportedly knew he was lying when he told the press corps earlier this year that then-National Security Adviser Michael Flynn had not talked with Russians about easing sanctions.

The New York Times reported last week that K. T. McFarland, a top staffer on then-President-elect Donald Trump's transition team, wrote a Dec. 29, 2016 email accusing President Barack Obama's administration of trying to undermine Trump by placing sanctions on Russia for its interference in the U.S. election. The email was eventually forward to Spicer and others on the transition team.

"As part of the outreach, Ms. McFarland wrote, Mr. Flynn would be speaking with the Russian ambassador, Mr. Kislyak, hours after Mr. Obama’s sanctions were announced," the Times noted.

McFarland argued that the sanctions would make it more difficult for Trump to make deals with Russia, “which has just thrown the U.S.A. election to him."

During a Jan. 23 White House press conference, Spicer told a different story about Flynn's talk with Russian ambassador Sergey Kislyak, even though he seemingly should have known better.

"I talked to Gen. Flynn about this again last night," Spicer explained to reporters at the time. "One call, [Flynn] talks about four subjects. "One was the loss of life in the plane crash that took the military choir, two was Christmas and holiday greetings, three was to talk about a conference in Syria and, four, was to set up -- to talk about after the inauguration, setting up a call between President Putin and President Trump."