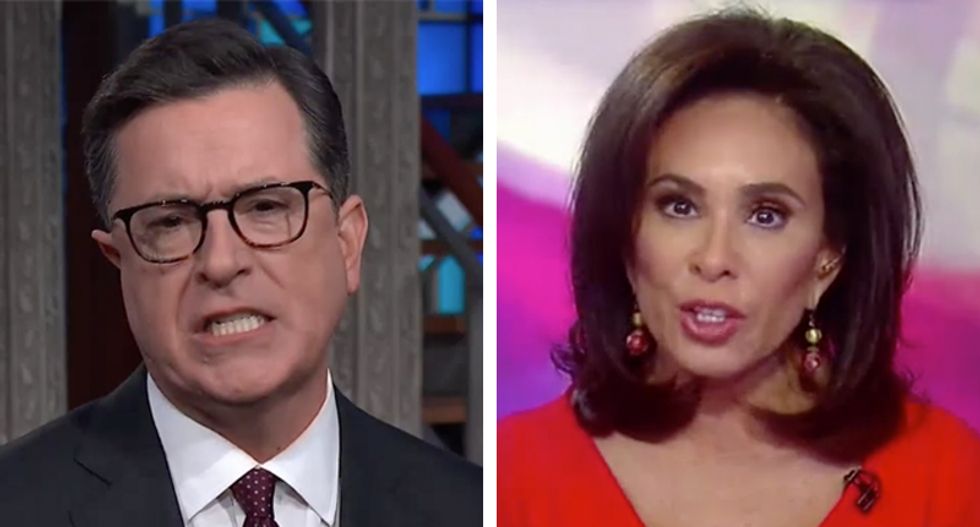 In a New York Times profile, published Sunday, it was reported that Pirro recently spent “more than an hour” at the White House “whipping up the president against Robert Mueller,” the special counsel leading an investigation into Russian collusion with the Trump campaign.

“It’s his dream come true! A live performance of Fox News,” Colbert exclaimed. “In the commercial break, they even sold him self-lubricating catheter.”

“Judge Pirro has a need, a need for screed,” Colbert said. “So she kept up her attack on Mueller and the FBI on what can only be described as her television show.”

He then played a clip of an enraged Pirro delivering her “opening monologue” on Sunday’s episode of “Justice with Judge Jeanine.”

“There is a cleansing needed in our FBI and our Department of Justice,” Pirro ranted in that clip. “It needs to be cleansed of individuals who should not just be fired, but who need to be taken out in handcuffs.”

"The stench coming out of the DOJ and FBI is like that of a third-world country where money and boys and clubs decide elections," she added.

Colbert then performed his own version of Pirro’s screed.

“Mueller and his corrupt junta are maggots gorging on the corpse of Lady Liberty, and freedom-loving patriots must drink their blood from the chalice of justice,” he said. “And that’s my opening, join the conversation on Insta, with #PushMuellerIntoTraffic!”