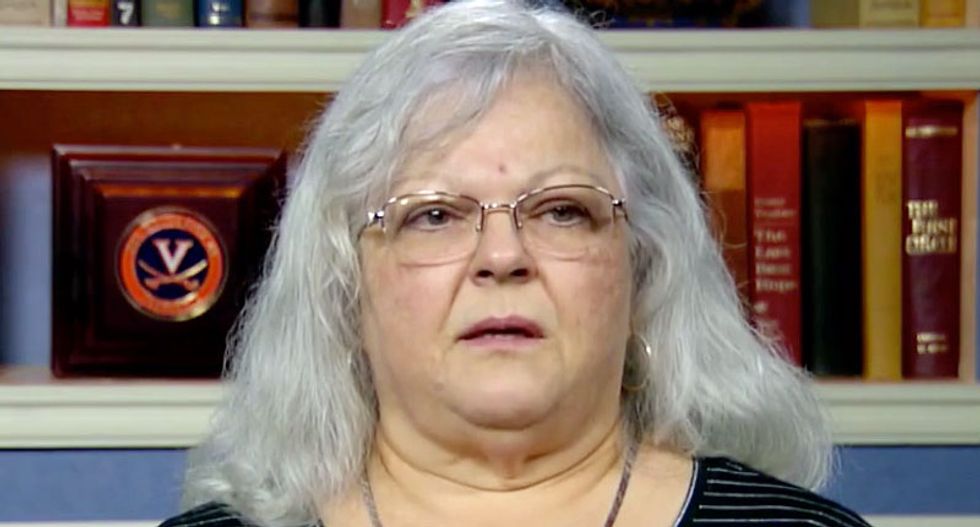 The mother of Heather Heyer, the anti-fascism activist who was murdered during August's white nationalist rally in Charlottesville, Virgina, had harsh words for President Donald Trump during a Friday interview with MSNBC's Katy Tur.

"It's been four months since the world watched as men carrying Nazi flags clashed with counter-protesters in Charlottesville, Virginia. Heather Heyer was among those demonstrating against the white nationalists who were rallying in support of Confederate monuments. The 32-year-old was run down by a man who drove his car into the crowd. President Trump said shortly her death that 'both sides' were to blame for the violence," Tur reminded.

"Are you still getting threats? What sort of things do they say?" Tur asked Susan Bro.

"She shouldn't have been there in the first place, why didn't you stop her from going? More N's should have been killed, she was an N-lover and that's why she was there, glad she died, she was a fat slob," Bro explained. "I said -- yes, my daughter was overweight, that still doesn't excuse somebody driving into a crowd and killing her."

"You know, it's been a couple months since this happened, and you've gotten some distance from it and you've told other outlets, including The Daily Beast, that you think the president is responsible. Why is that?" Tur asked.

"I don't think he's responsible entirely by any means, but he is certainly a symptom of the divisiveness in the country and he doesn't do anything to try to heal that gap," Bro explained. "He encourages the divisiveness."

"In the beginning, you were hesitant to say that," Tur noted. "What's behind this change of heart?"

"I still want to protect my family and he's still the president, so I'm still trying to not be too aggressive in my opinions, shall we say," Bro explained. "There seems to be an unrelenting pattern of divisiveness encouraged. It doesn't seem to let up, I thought maybe it would let up after the election, but it still seems to be ongoing."

"What do you think he can do to make it better?"

"I think that he is who he is and he's not likely to change," Bro suggested. "I think we have to make changes ourselves on a personal level, one on one, ground swell of people talking to one another. People will often ask me what is it you're trying to accomplish? I said I'm making ripples and encouraging other people to make ripples and if you get enough ripples together you get a wave and if you get enough waves together you get a tsunami and that's what we need, is a tsunami is change, but it's got to come from within people, it can't be legislated down, it's got to come from within the heart."

"From what I've seen of him interacting with people, he doesn't care what I think, nor other people think," Bro observed. "He has his opinions and he's going to give his opinions, so i'm not wasting my breath and not wasting his time either."

"Some things can't be compromised: we cannot compromise with white supremacy or nazism, we simply cannot," Bro argued. "But we can find ways to get along and have better civil justice, social justice for all people."

"Susan Bro, thank you for joining us, and let me just say on behalf of everybody here, your daughter was brave, she was good and she will be remembered," Tur concluded.