Heather Heyer's mom: I've had to hide my daughter's grave from neo-Nazis 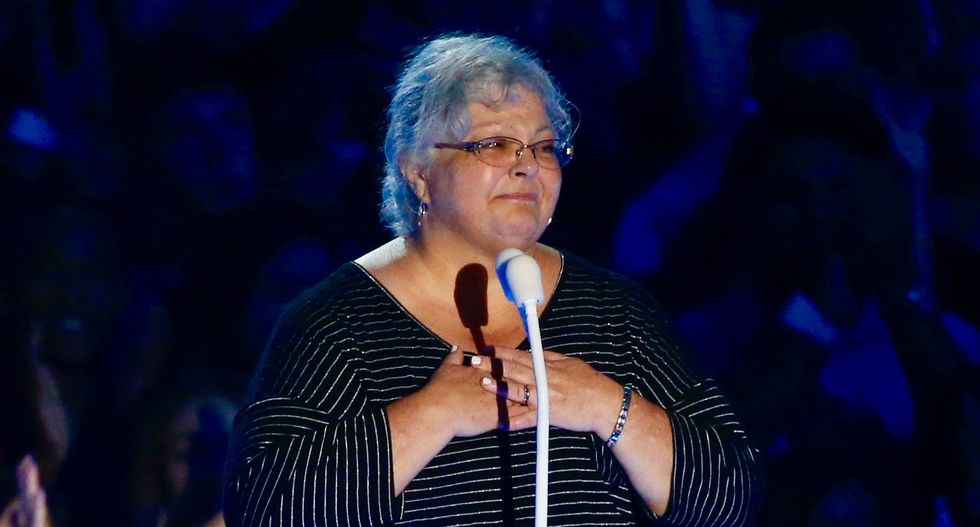 Susan Bro -- the mother of Heather Heyer, 32, who was killed in Charlottesville, VA by a white supremacist -- told The Daily Beast that she has been forced to conceal her daughter's grave site because of ongoing violent threats against her and her family.

Heyer's ashes, Bro said, are in an undisclosed, unmarked location that is "completely protected" from the public. The grieving mother said she had to take that step because threats and harassment from the violent right have not stopped since the day 20-year-old James Alex Fields, Jr. plowed his car into a crowd of anti-racist protesters, killing Heyer and injuring 19 others.

“It’s a symptom of hate in society that you should have to protect your child’s grave, for Pete’s sake,” said Bro to Tim Teeman. “So, I’m protecting my child now.”

Teeman wrote that Bro blames President Donald Trump in part for her daughter's death because of the president's refusal to disavow right-wing extremists and his tacit approval of white supremacy.

“I’m starting to come to that conclusion because he definitely pushes forward a hateful agenda," she said. "There are family members that will possibly not have anything to do with me for saying so. Many family members are strong Trump supporters, and continue to be so despite everything they see.”

Bro is now working out of an office at the law firm where her daughter worked, piecing together the Heather Heyer Foundation, a social justice nonprofit Bro started in her daughter's name.

“As long as I’m doing something proactive, I can control the feelings, the emotions, a little better,” she said.

Fields faces a preliminary hearing on Thursday. Bro said it will be the first time she will come face-to-face with the man accused of killing her daughter. He is charged with "second-degree murder, three counts of malicious wounding, three counts of aggravated malicious wounding, two charges of felonious assault and failure to stop that led to death."

Bro said that for Fields to plow his car into the crowd of anti-racist protesters was "a pretty stupid move. He’s old enough to know better. My husband Kim looked at what he did, and said it reminded him of a video game, except in one of those you drive through people, and bodies fly everywhere with no consequence. I don’t know the kid, I’ve never met him. The first time I will see him will be in court this week. I will be going.”

The grieving mom heaped scorn on Pres. Trump for his statement that "both sides" were to blame for what happened in Charlottesville on Aug. 12.

“You can’t say there were good people coming into town with their fists taped prepared to draw blood and do harm," she said. "That’s not good people. Nazis: bad people. White supremacists: bad people. And I don’t see that you can call it any other way. If you choose to align yourself with those people, and you choose to call them ‘good,’ then you’ve told me what sort of person you are. So now I have your number and now I know how I choose to respond to you. And in his case, that means: ‘I’m not responding to you, you don’t get my time of day.’”

Of Trump's frantic attempts to call her during her daughter's funeral, Bro said, "I thought, ‘Well, screw him, I’m not dealing with this.’ I’m not talking to him. I have no need to go through this charade of pretending to be nice and happy.

“He is the president of the United States. That carries a certain weight and power with it. I choose not to poke the bear in power, but I’m definitely not happy with how he has chosen to drive forward with white supremacy and neo-Nazis. When someone misspeaks a time or two, it’s one thing, but when you continue to misspeak and continue to misspeak until there are falsehoods and false stories, and make thoughtless remarks, that to me looks like a planned, intentional hurt. So, my respect definitely dims somewhat, shall we say.”