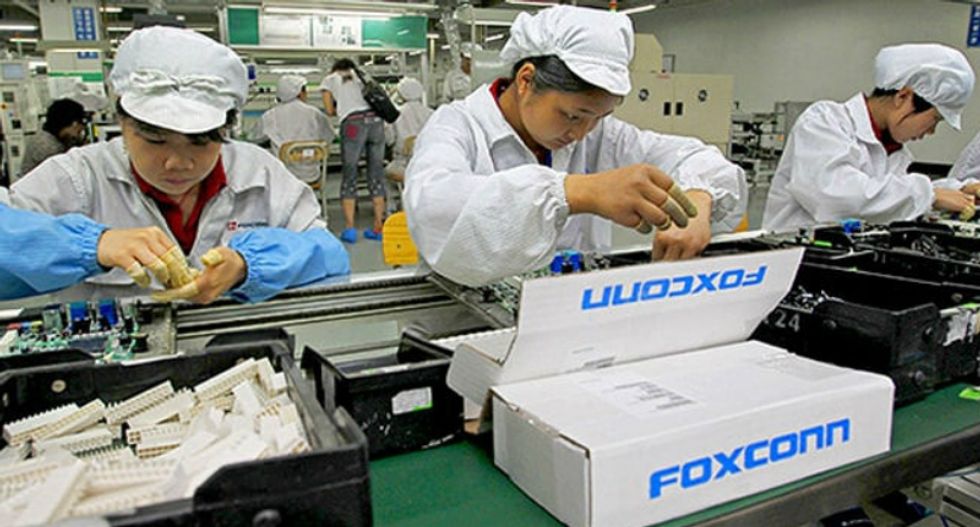 Workers at a Foxconn plant in China. Image via Creative Commons.

Despite being lauded as a windfall for their state, Wisconsin Gov. Scott Walker's (R) plan to bring electronics manufacturer Foxconn to America's dairyland comes with a hefty taxpayer price tag.

As Vice News reported Wednesday, Walker's record-breaking tax cuts for the Chinese manufacturer is slated to bring 13,000 jobs to Wisconsin — but taxpayers will have to match nearly half of the $9 billion investment on the company's part.

The laundry list of amenities needed to bring the company known for manufacturing Apple products continues to grow: a brand new $30 million highway, $134 million "siphoned off from other highway projects, to widen already existing roads near the new factory," $140 million in electric bills (paid for primarily by 5 million Southern Wisconsinites) and a nearly $7 out-of-state ad campaign "to help attract workers" to the plant.

The grand total? Between $4.1 and $4.5 billion, according to the online daily news publication Urban Milwaukee.

"These investments are very likely not the last time the state will be footing the bill for infrastructure improvements designed to cater to the plant," Vice notes. Walker's tax break promises the plant that the state will pay "40% of local governments’ expenses for building even more infrastructure."

Two Black ranchers from Colorado were arrested recently on alleged stalking charges -- but they say they're actually the victims of a years-long intimidation campaign by their white neighbors and local police.

Local news station 9 News reports that Courtney and Nicole Mallery of El Paso County, Colorado say that their farm has been targeted for years by racist neighbors through "acts of vandalism and animal mutilation of their livestock."

Chickadees, titmice and nuthatches flocking together benefit from a diversity bonus – so do other animals, including humans

In these mixed flocks, chickadees are almost always the subordinate individuals, outcompeted by their larger flockmates. Why, then, do chickadees regularly join these flocks? Might they have a symbiotic relationship with other species in these flocks?