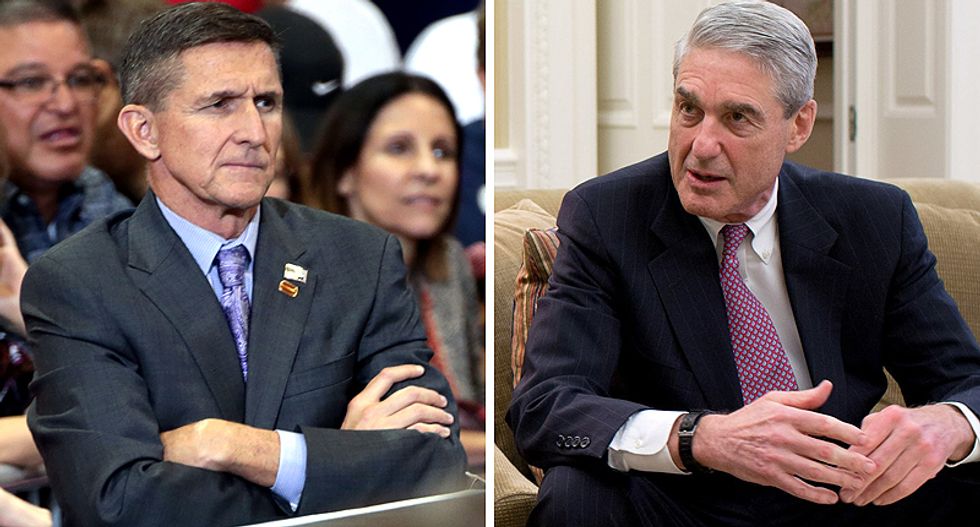 MSNBC’s Ari Melber on Friday analyzed the bombshell development that Donald Trump’s former national security adviser Michael Flynn pleaded guilty to lying to the FBI as part of special counsel Robert Mueller’s investigation. According to Melber, it’s clear that Mueller is building a case against other members of the administration, arguing he’s “starting to tell a story” with the pattern of his indictments.

“Bob Mueller doesn’t speak through the press, he doesn’t leak,” Melber said of the special counsel’s investigation. ”He speaks only through the actions of these lawful materials, in this case, these informations and these other lawful documents that come out.”

In a statement of offense released Friday, Mueller revealed that the day after former president Barack Obama signed new sanctions against Russia for meddling in the 2016 presidential election, Flynn called a senior Trump's transition team official.

That official "was with other members of the Presidential Transition Team at the Mar-a-Lago resort in Palm Beach, Florida, to discuss what, if anything, to communicate" to Russian Ambassador Sergey Kislyak about the sanctions levied against the country.

Mueller also disclosed that shortly after Trump’s son-in-law Jared Kushner asked Kislyak about establishing a back-channel line of communication between then-President-elect Trump and the Kremlin, "a very senior member of the Presidential Transition Team directed Flynn to contact officials from foreign governments, including Russia, to learn where each government stood” on a U.N. Security Council resolution aimed at Isreal.” Bloomberg reports that “very senior” official was Kushner.

“I think it is very notable that Bob Mueller has put these people, without naming them,” Melber said. “He put these people in for a reason, he’s starting to tell a story, and the story is that Mike Flynn didn't act alone.”

Flynn is reportedly planning to “fully cooperate” with Mueller’s investigation. According to ABC News’ Brian Ross, the president’s onetime national security adviser is “prepared to testify… against President Trump, against members of the Trump family and others in the White House.”