Jared Kushner is currently in 'secret talks' with the Saudis -- and Rex Tillerson is freaked out: report 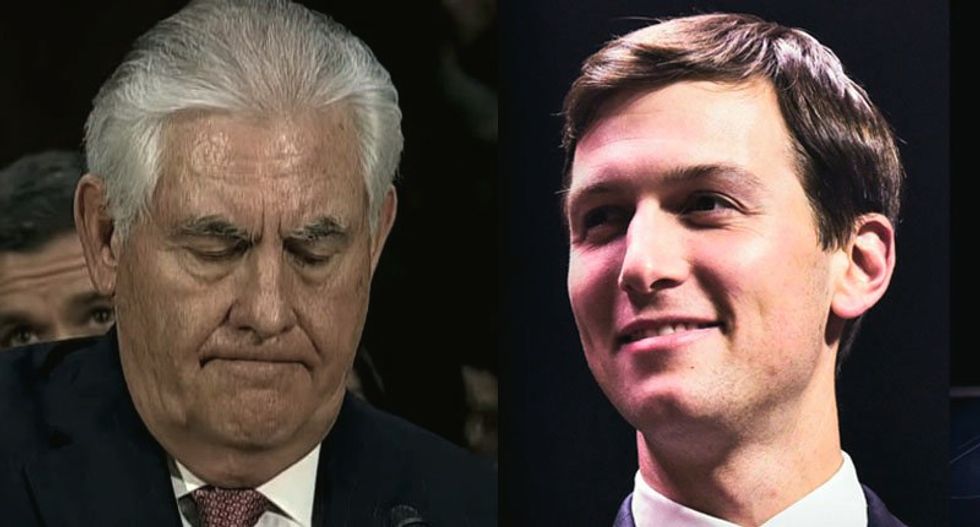 President Donald Trump's son-in-law and adviser Jared Kushner is reportedly in current talks with the Saudi Arabian crown prince -- and Secretary of State Rex Tillerson is worried it may "tip the region into chaos."

According to a Bloomberg report, three people close to Tillerson say the secretary of state is worried the discussions could "backfire" and feels that he is being deliberately left in the dark.

"The central goal of the Kushner-Prince Mohammed negotiations," the report explains, "is for an historic agreement featuring the creation of a Palestinian state or territory backed financially by a number of countries including Saudi Arabia, which could put tens of billions of dollars toward the effort."

"The problem is, the senior presidential adviser does not consult with the State Department -- and it’s unclear the level of consultation that goes on with the [National Security Council],” said one of those familiar with Tillerson's thinking. “And that’s a problem for both the NSC and the State Department and it’s not something we can easily solve.”

These concerns were issued before reports that Tillerson was soon to be pushed out of the State Department. Trump took to Twitter to deny those reports earlier on Friday, but those close to the secretary of state say Kushner may be "stoking" those reports.

"Tillerson and other senior State Department officials are also concerned that Saudi leaders, having been held at arm’s length by President Barack Obama, see the connection with Kushner as a way to regain influence in the White House and U.S. backing for actions that could be controversial," the report added.