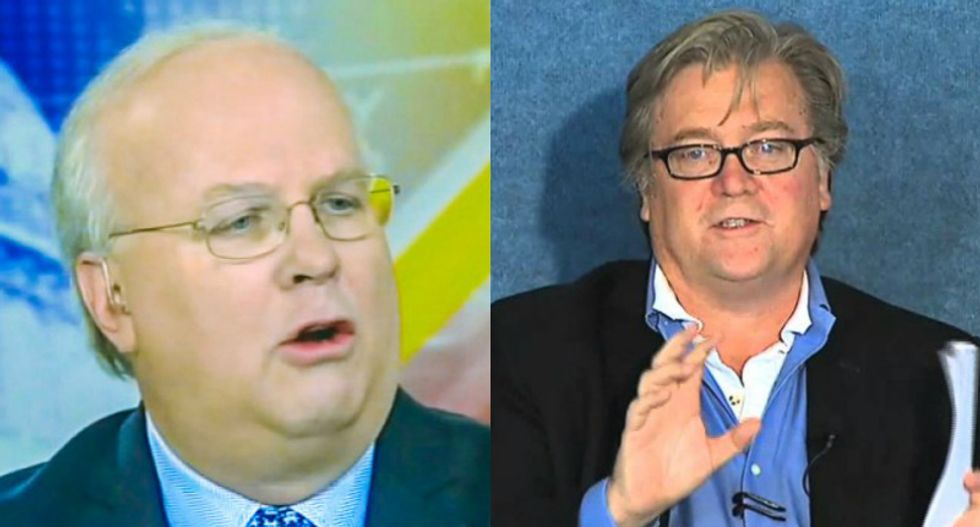 The deepening chasm between "establishment" Republicans and their more "radical" white nationalist counterparts got a bit more fractious on Wednesday when Karl Rove took a jab at Breitbart executive Steve Bannon.

Instead, the former aide to former President George W. Bush said, Bannon gave two speeches where he insulted the University of Alabama as a "second-rate educational institution" compared to his alma maters of Georgetown and Harvard, "and he showed up looking like, I don't know, a scruffy out-of-work homeless guys."

Rove then described Bannon's outfit at one of his Moore speeches: "three shirts layered on each other underneath a fatigue jacket, unshaven and ranting and raving at the so-called establishment in Washington."

In doing so, Bannon discouraged "Republicans from uniting behind his candidate."

This wasn't the first time Rove criticized of the erstwhile aide to President Donald Trump. In October, he penned an op-ed in the Wall Street Journal insulting Bannon after the latter threatened to primary a North Carolina Republican Rove backed as part of his GOP establishment "hit list."

Rove wasn't alone in his criticisms of Bannon -- Luther Strange, the Republican appointed to the Alabama Senate seat after Jeff Sessions left it to become attorney general also said on Fox News that the Breitbart executive helped accomplish an impossible task -- getting a Democrat elected in Alabama.

Watch one Republican take down another over party in-fighting below.