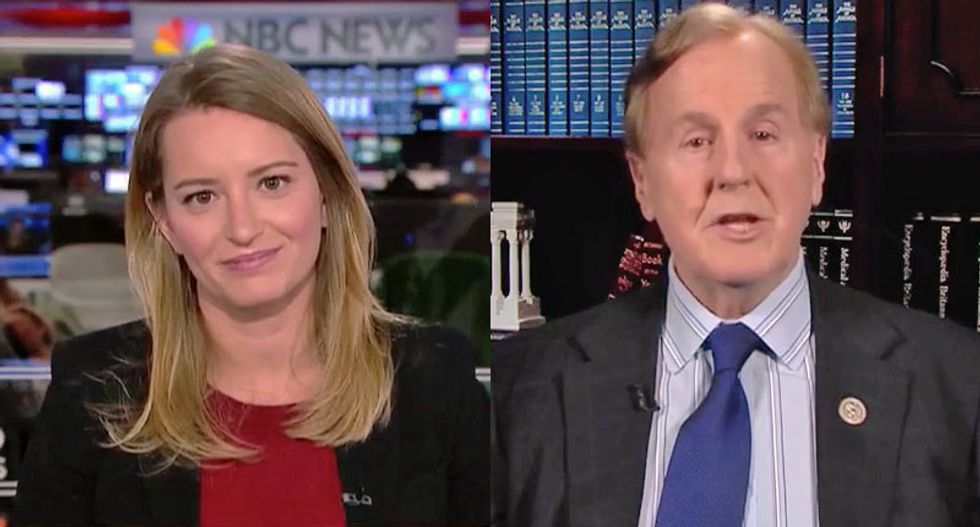 Conservative Congressman Robert Pettinger (R-NC) claimed on MSNBC that the tax benefit would be good because Americans own corporate stock and that it would have been socialism if taxes were not cut for the wealthy.

"Why are the majority of the benefits going to the wealthy? Why aren't majority going to middle class?" MSNBC anchor Katy Tur asked.

"That's a narrative that some on the left..." Pettinger began, before Tur interrupted.

"Tax Policy Research, it's a nonpartisan tax analysis, it's not my analysis," Tur noted.

"A lot of nonpartisan groups out there tend to pontificate off a left narrative," Pettinger argued.

"But hold on," Tur interjected. "These are the groups that are generally the ones you rely on when you map out a bill and say how much is this bill going to cost? What are the effects going to be?"

"These are the folks that you rely on in order to score that bill and judge that bill and decide on whether or not that bill is going to be effective in the way that you want it to be effective," Tur reminded. "All of the arguments out there -- even the most beneficial arguments to the bill -- say that the majority of the tax cuts, and this is really something you can't argue with, are going to the wealthy and that they going to corporations."

Then Pettinger claimed that all Americans own corporate stock.

"Are you saying that the majority of American people own stock in corporation?" Tur asked.

"The American people are shareholders, they own stock," Pettinger argued.

"Why not do job creation by giving the money to the middle class and to lower class so they can reinvest in themselves?" Tur asked again.

"I understand your narrative and frankly that is the concept of socialism," Pettinger claimed.

"Tax cuts they are not socialism," Tur noted.