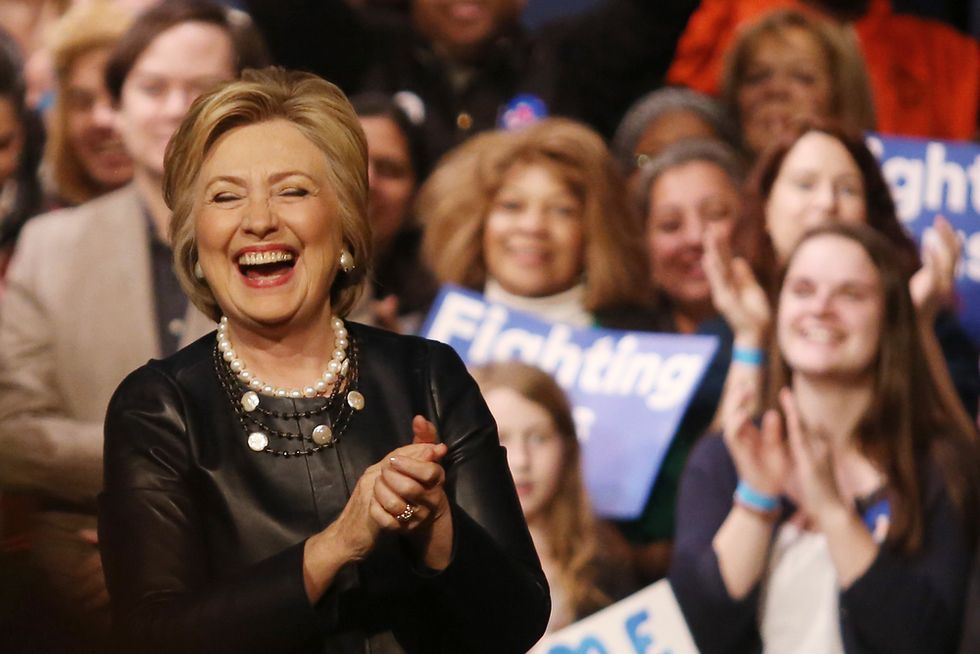 A rare peek into the evolution of Hillary Clinton’s education platform is afforded through an overlooked Wikileaks-published document. Entitled “Policy Book— FINAL,” the PDF file was attached to a 2014 email sent to John Podesta, Clinton’s future campaign chair. The education portion of the document runs 66 pages, mostly concentrated on K-12 policy, and captures specific input from billionaire donors looking to overhaul and privatize public education.

One of the most connected “thought leaders” discussed is Laurene Powell Jobs, the widow of Apple founder Steve Jobs, and the head of the Emerson Collective, a prominent education reform advocacy group. Powell Jobs who has been close with the Clintons since the late '90s, also sat with Betsy DeVos on the board of Jeb Bush’s Foundation for Excellence in Education. She set up billionaire “roundtables” with Clinton’s campaign advisors through 2015 while donating millions to Priorities USA, Clinton’s main PAC.

Notes taken by Clinton aide Ann O’Leary were made in interviews with Powell Jobs and Bruce Reed, CEO of The Broad Foundation (and former chief of staff to Joe Biden). According to the notes, the “experts” were calling for new federal controls, more for-profit companies and more technology in public schools — but first on the menu was a bold remake of the teaching “profession”:

In previous speeches, Clinton campaign manager John Podesta indicated that recruiting and grooming younger, more compliant teachers was the plan to overcome resistance to corporate education reform over the long term. But in the policy book, Bruce Reed also sets his sights on teaching colleges, claiming “they don’t deliver the goods.”

Representing billionaire Eli Broad, Bruce Reed celebrated the paralysis in local governance in post-Katrina New Orleans as key to pulling off the rapid expansion of charter schools, exploiting disaster without oversight by any “central office”:

“New Orleans is an amazing story — when you make it possible to get political dysfunction and sick a bunch of talent on the problem — it’s the one place where grand bargain of charters has been kept the best.”

New Orleans' "amazing" story resulted in the firing of 7,500 mostly black school employees, wiping out a substantial part of the city’s black middle class. Meanwhile, the “miracle” claims of boosters like Reed have fallen apart. A recent editorial in New Orleans’ African American newspaper called out the false promises and lack of results from the charter experiment.

Tying campaign donations to a singular issue like expanding charter schools might in days past been seen as a prohibited quid-pro-quo. But in this cycle, Podesta, O’Leary and Tanden all busily raised campaign money from the same billionaire education reformers with whom they were also talking policy specifics.

But they did more than talk. On June 20, 2015, O'Leary sent Podesta an email revealing the campaign adopted two of Powell Jobs' suggestions, including "infusing best ideas from charter schools into our traditional public schools.” When Clinton announced this policy in a speech to teachers, however, it was the one line that drew boos.

“Donors want to hear where she stands” John Petry, a founder of both Democrats for Education Reform (DFER) and Success Academy, New York’s largest network of charter schools, told the New York Times. Petry was explicit, declaring that he and his billionaire associates would instead put money into congressional, state and local races, behind candidates who favored a “more businesslike approach” to education, and tying teacher tenure to standardized test scores.

Clinton’s advisors warned her that wealthy donors like Petry, Whitney Tilson, or Eli Broad could walk if she didn’t support charter schools. Broad would indeed threaten to withhold funding from Clinton when she criticized charter schools for excluding difficult students. John Podesta and Ann O’Leary would publicly correct Clinton, reaffirming her commitment to charters.

The revolving door was also in full swing, with top Clinton and Obama administration officials working for “non-profits” run by Powell Jobs and Tom Steyer. In the end, the influence of the various well-connected “experts” advising Clinton could be felt in an official education platform that endorsed a test-centric approach that was becoming unpopular with parents, students and educators.

Clinton was also advised to “Stand Up for the Common Core” despite the botched implementation that was then unfolding from coast to coast. By this time, states were already moving to junk the standards, while the Washington Post was asking whether Common Core could sink Jeb Bush’s presidential run. Yet her advisors were nudging her to echo the Bush talking point of “kindler, gentler” tests.

The feuds over testing resulted in Clinton largely avoiding the controversy. Her advisors describe New York as a messy example, where rushed implementation of President Obama’s Race to the Top’s test-based teacher evaluations “fueled opposition”:

“Governor Cuomo had a very heated political battle with the state’s teachers unions in 2013 over the new teacher evaluation system…[t]he use of test scores in teacher evaluation has caused a substantial backlash . . . This backlash caused the Governor (in the midst of his re-election cycle) to agree to a “moratorium” on using the tests for two years. In an effort to win over Common Core opponents, he ran ads saying he supported a delay in the “use [of] Common Core test scores for at least five years…”

In their efforts to steer Clinton towards pro-testing policies, her advisors relied on education reform talking points. Neera Tanden, head of the Clinton-aligned Center for American Progress wrote that “New York has shown positive gains resulting from the implementation of the new higher standards.” But New York’s repeated changes of proficiency thresholds nullified any statistical validity. Tanden was advising Clinton based on a test-centric philosophy that educators, psychometric experts and court rulings have rejected since 2011.

Under the heading “[g]ood ideas from the AFT crowd” the 2014 document mentions Randi Weingarten’s call for more “full-service community schools.” Clinton would not promote this much on the campaign stump though, outside of a speech made right back to the AFT. To this day, the education section of Clinton’s 2016 website says only vaguely that states should “use federal education funding to implement social and emotional support interventions.”

Behind the scenes, however, O’Leary was pushing for holistic student supports, by March of 2016 suggesting that Clinton’s K-12 platform:

“…focus on the whole child — and acknowledge that toxic stress created by poverty does impact learning and that teachers cannot do this work alone. We need to support parents through two-generation approaches to learning. We need to provide schools the resources to hire guidance counselors and mental health providers, and make sure that children from low-income communities once again have music and art education and opportunities to participate in gymnastics and ballet. These activities cannot be reserved for only those who can pay for them.”

The Clinton campaign did not bring this message forward, falling silent, even when pressed for more specifics on education plans, as detailed in this CBS article. Meanwhile, emails showed that Clinton and campaign staff knew their donors were behind a lawsuit seeking to end teacher tenure, so her plan was to stay quiet about it.

Not mentioning education would become important in the general election. This policy book shows a snapshot in time when wealthy donors were pushing Clinton’s and Jeb’s positions together, seeking more of the federal privatization begun under George W. Bush and continued by Obama.

Seeing this, Trump would tell ticked-off voters what they wanted to hear, vowing loudly to “terminate Common Core out of Washington.” He knew (or should have known) that it was already a state-based decision to use the standards by late 2015. After the election, Trump would completely drop the idea.

This was predicted by John Podesta, who bragged just after the 2012 election about nullifying education policy differences between President Obama and Mitt Romney. Sitting next to Jeb Bush, Podesta proclaimed “ed reform” a bipartisan affair, telling donors “the Obama administration has made its key priorities clear. The Republicans are pretty much in the same place…this area is ripe for cooperation between the center-right and center-left”.

As the reformer money rolled in, Clinton avoided public stances, with articles by 2015 noting she was getting support from both sides yet still unclear on her vision, critical of testing and charters while still supporting them. From Politico:

Reading this, John Podesta wrote in a private email: “Complicated. She won’t back off criticism, but won’t object to taking contributions.”

Ann O’Leary would later tell Podesta that Powell Jobs and other education reformers were “pleased with our work” but were “wary of a few issues” like test-based accountability, then being negotiated in the U.S. Senate:

“The reauthorization of the law – spearheaded by Senators Murray and Alexander in the Senate – provides flexibility to states to set their own accountability systems and their own goals for improvement. The civil rights groups and the ed reformers are very concerned that this lack of accountability will leave poor and minority students with no real systems for improving the poor education that they are receiving.

To date, HRC has stayed out of this debate: generally praising the Senate for moving forward with the reauthorization by keeping standards and testing in place and saying little about the accountability system. I do not believe that she should weigh in on this debate, but rather should continue to monitor it closely.”

In reality, wealthy and well-connected education reformers were likely more instrumental in calling for the “accountability” that kept federal testing mandates in place than were civil rights groups. A key player in this was Russlynn Ali, former Assistant Secretary of Civil Rights to US Education Secretary Arne Duncan. Ali would become an intimate advisor to Powell Jobs, and the head of the Emerson Collective, the charter school advocacy group that Powell Jobs founded.

What did we learn?

The same cadre of billionaires that tried to steer Clinton towards unpopular pro-testing policies and controversial school privatization schemes are hard at work today. Powell Jobs, for example, has sought greater influence, funding a lavish and high-profile effort to “rethink high school” and acquiring a majority stake in The Atlantic. In July, Powell Jobs was reportedly contacted by Ivanka Trump on behalf of the administration, seeking "advice on shaping funding approaches" for STEM education in public schools.

While Eli Broad may have stepped down from his foundation, his post-disaster playbook of taking advantage of local government paralysis remains alive and well. Efforts to replicate New Orleans’ “amazing story” appear to be thriving in Puerto Rico, where schools were devastated by Hurricane Maria.

The 2014 policy book reveals some essential lessons about how education policy is crafted: in secret, with the input and influence of billionaire donors seeking more school privatization and testing—regardless of what party is in power. Even as the backlash against testing and the Common Core grew, Clinton’s advisors pushed her to embrace them. Clinton vacillated, then fell silent on K-12 policy, and as a result, education issues were largely left out of the election debate. Today, under Trump, privatization marches on worse than ever.