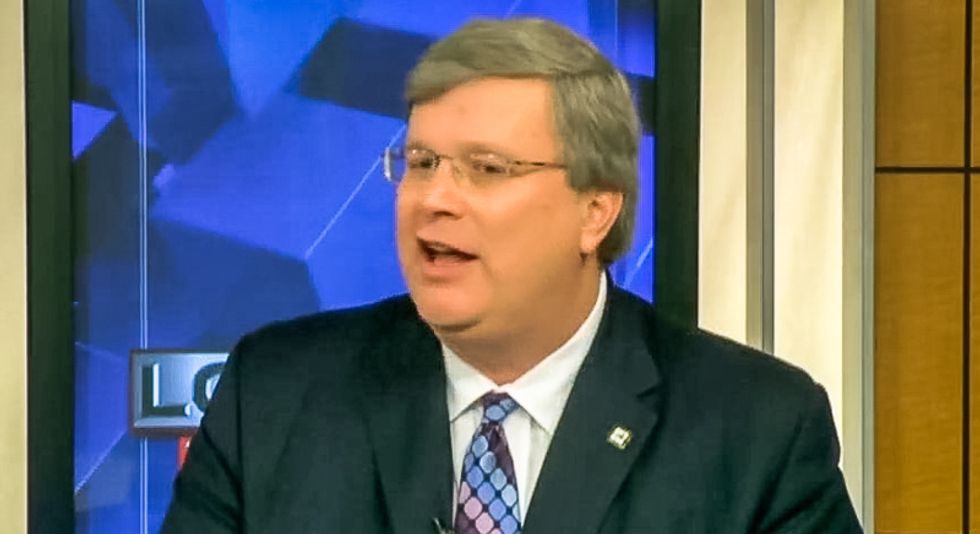 Memphis Mayor Jim Strickland slammed Fox News commentator Todd Starnes over the weekend for suggesting that he should be jailed over the removal of two Confederate statues.

After the city of Memphis decided to sell off two of its Confederate statues, Starnes wrote that its mayor "should be hauled out of city hall in handcuffs."

"While most of the good citizens of Memphis were attending Wednesday night church services, the mayor and city council were busy finalizing a despicable plot to bypass the law and desecrate a Civil War gravesite," the Fox pundit opined. "I urge the governor and the state legislature to launch an immediate investigation of the corruption that has infested Memphis City Hall. The law demands it."

In an interview that aired on Local 24's This Week program, the Memphis mayor responded to Starnes.

"He's a liar who doesn't know what he's doing," Strickland said. "And trying to get attention to himself."

According to the mayor, there is nothing illegal about the city's decision to sell off two of its Confederate statues.

"Cite one law that we violated, cite one law," Strickland insisted.

Bruce McMullen, the city's chief legal officer, pointed out that there was nothing in the state's historical commission law that prevented the city from selling property.

"The Tennessee Historical Commission statute lists a number of things you can't do to those statues," he explained. "They listed a long line of things. One thing that they left out that they could have added in there was you can't sell them."

"I'm a little offended that someone would just spout off something like that without having done any research or any thought," McMullen said of Starnes.

Watch the video below from Local 24.

Andrew McCabe: Trump is inflaming violent followers 'because he knows the effects it will have'

This comes after an incident last week in which a former January 6 rioter was killed trying to shoot his way into the FBI field office in Cincinnati, Ohio.

'Cut his wife's head off, cut his kid's head off': Congressman posts audio of death threat

Democratic U.S. Rep. Eric Swalwell of California posted audio of a violent death threat against him and his family, with the speaker calling for "all Democrats" to be killed and ending with a call for "Trump 2024."

Swalwell, married with three children, is a popular target for the right. The California Democrat is a former candidate for president, a visible member of the Democratic Party, and is co-chair of the House Democratic Steering Committee.