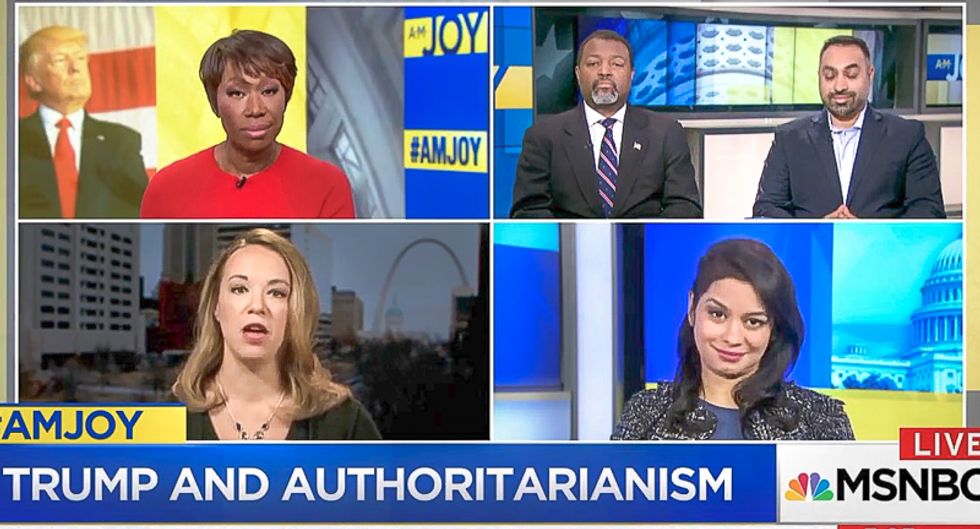 Journalist Sarah Kendzior on Sunday noted that the word "hysterical" was often used to put down women who speak the truth.

On Sunday's edition of Am Joy on MSNBC, host Joy Reid noted that she was recently criticized by right-wing media for pointing out how the Trump administration was following the playbook of authoritarian governments.

"Step one, claim the investigation of you is fraud being conducted by enemies of the state," Reid told MSNBC host Chris Matthews last week. "Step two, get your state-run media, your affinity media to echo that into your base and whip them up into a frenzy against those investigating you. Step three, get the state party -- the Republican Party -- to echo that from the seat of government."

"And then, of course, you've got to add that last step," Reid explained. "Call for the prosecution of your political enemies. In this case, dredging up Hillary Clinton to again call to locker her up."

On Sunday, Reid asked Kendzior, an expert on authoritarian governments, if she "was being hysterical here in equating what Donald Trump is doing with what the kleptocratic leaders of authoritarian states do."

"No, you're not being hysterical," Kendzior insisted. "Hysterical is just a word people use to describe women who speak a plain truth."

"Trump has been on this path from the moment he declared his candidacy," Kendzior added. "Whether it's the persecution of ethnic minorities, his clear intentions to use the government as a kleptocratic tool in order to enhance his families personal wealth, his targets on free speech, freedom of religion, political opponents. And it's only gotten worse as he's gotten into office, as he's consolidated power and as he's faced very little opposition from the Republicans, who should be serving the public, who should be keeping people like Trump and his cadre of other corrupt and criminal actors in check."

"And so, no," she concluded. "You are absolutely right to react in the way that you have."

Reid pointed out that Republicans in Congress had been "behaving as if they were the defense counsel for Donald Trump, attacking the FBI, accusing them of almost being criminals."

"It was breathtaking to watch Republicans do that." Reid continued. "But the did it with such velocity that you wonder, are they party of Donald Trump's administration or are they a co-equal branch of government."

"Meanwhile you find out that Republicans who are passing the exorbitant tax cut for the wealthy," she remarked. "Something like two-thirds of Congress are themselves millionaires. It's almost if Donald Trump and Republicans are creating their own oligarchy."