'Nothing like this, or even close, has ever happened': Atlanta Airport blackout is a chaotic mess 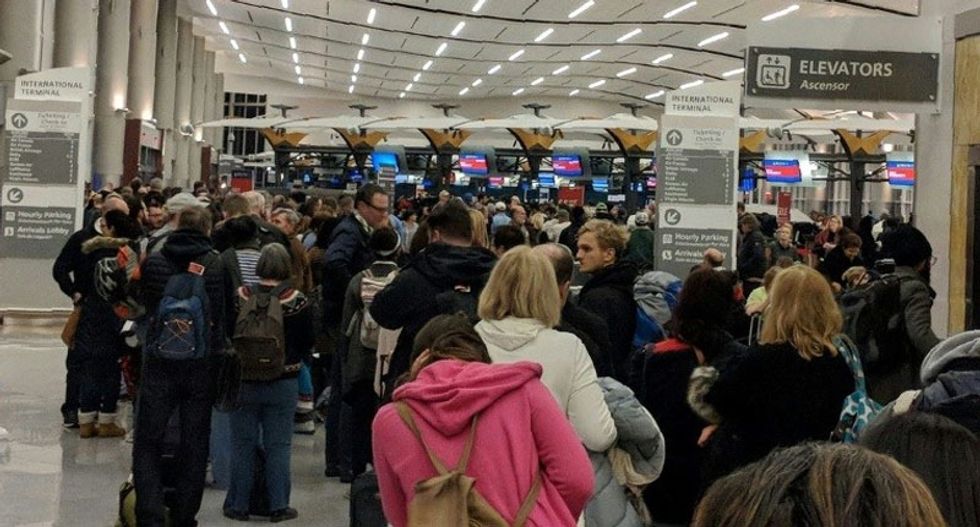 This picture obtained on the Twitter account of Mike Vizdos and taken on December 17, 2017 shows passengers waiting in the terminal of the Atlanta Hartsfield-Jackson airport in Atlanta, Georgia. (AFP/Mike Vizdos)

As the power outage at the world's busiest airport, Atlanta's Hartsfield-Jackson, stretched into its fifth hour, victims of the blackout sent ghostly images of the airport's darkened corridors and stranded passengers.

Conflicting messages from Georgia Power and airport personnel have added to the confusion about what has caused the power failure and when it will end. Furthermore, as hundreds of flights are canceled and thousands of passengers are rerouted, delays and cancelations are expected to spread to airports around the world.

Atlanta's 11 Alive news said that power is gradually being restored to some areas of the building and that construction crews are arriving with portable lighting rigs to help passengers trying to leave the airport. The Metro Atlanta Rapid Transit Authority (MARTA) is providing buses to help evacuate the airport.

CNN reported that a fire at a Georgia Power underground facility be to blame, but former Secretary of Transportation to President Barack Obama Anthony Foxx said it's inexcusable that the airport did not have a redundant emergency power supply in case of an outage of this kind.

Atlanta Mayor Kasim Reed (D) said at a press conference that there is no reason to believe at this time that the outage was caused deliberately.

Watch live video about this story, embedded below:

Atlanta airport evacuated. We are standing on the tarmac. Nobody can leave. #atlanta #atlairport
— Paul Ranum (@Paul Ranum) 1513545447.0