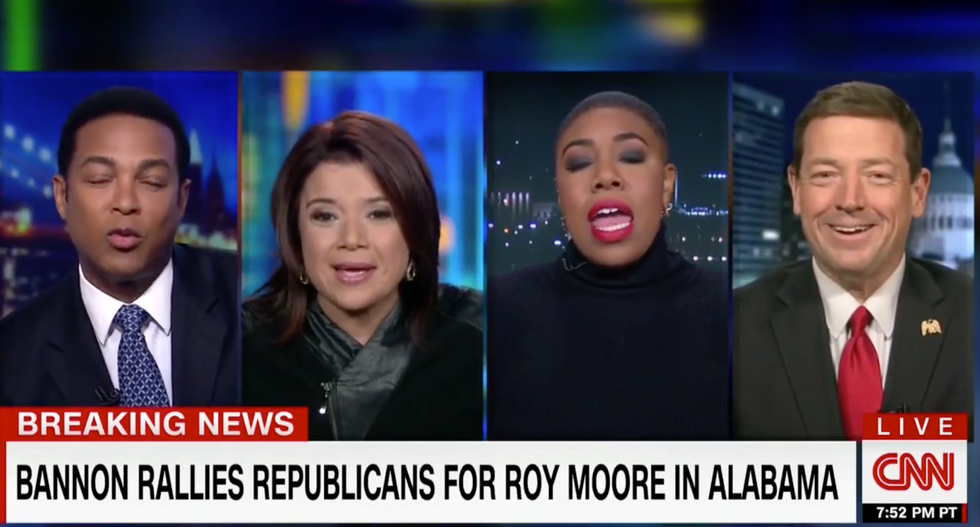 “What kind of message is the GOP sending?” Lemon asked Martin of the party’s support of Moore.

Martin replied that both the accusers and Moore deserve to be respected and heard before arguing that the multiple allegations of sexual misconduct against the candidate are “a political argument.”

“No, no, no, because you still didn't answer my question,” Lemon replied. “Listen, when you guys come on, I don't care if you're a Republican or Democrat, I just want to answer the damn question. What message is the GOP sending to by supporting someone who's accused of such horrible things?”

“America is a place where we don't run people off based on accusations and outcry in the media,” Martin said. “We allow a process that lets the truth come out. The accusers should be recognized but so should Roy Moore and

“The message they're sending is that they're a bunch of hypocrites who say one thing three weeks ago and when nothing changes, change their tune,” Navarro shot back. “They’re not the party of Lincoln. they're the party of Roy Moore and Grand Ole pedophiles who are willing to compromise morals and decency for more votes.”

Later in the segment, Martin argued that conservatives, including one-time Donald Trump adviser Steve Bannon, are taking on the “elite worldview” embodied by Navarro.

“What Bannon is talking about is Roy Moore for senate versus a very liberal Democrat,” Martin said. “… It’s a battle in the Republican party it's my team the people who believe in Americans and America first against Ana's elite world view. That world view is losing and she's mad about it.”

“What is more elite than three deferments for bone spurs, playing golf?” Lemon asked, referring to Trump. “What you're saying doesn't make sense.”

“The party Anna wanted wanted to have globalist policies to continue,” Martin claimed. “That's the elite view of the Republican party. Bannon is down there helping Roy Moore who went against that wing of the party and he won the primary.”