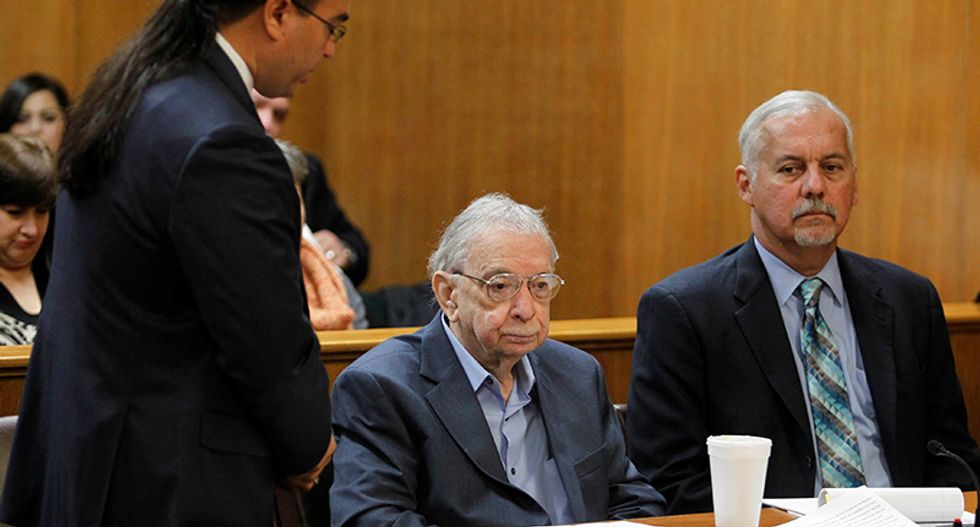 Former priest John Feit listens to his attorney O. Rene Flores (L), as he decides not to testify during the sentencing phase of his trial at the Hidalgo County Courthouse in Edinburg, Texas, U.S., December 8, 2017. REUTERS/Nathan Lambrecht/The Monitor/Pool

A retired Catholic priest convicted of murdering a former beauty queen who came to him for confession was sentenced to life in prison by a jury in south Texas on Friday, local media reported, ending a cold case that has troubled the community for nearly 60 years.

John Feit, a visiting priest in McAllen, Texas, when the second-grade teacher came to him for confession during Holy Week in 1960, was convicted on Thursday of premeditated murder in the death of Irene Garza, then 25.

It was the maximum sentence possible for Feit, who was 27 at the time of the murder and is now 85, KRGV TV and The Monitor of McAllen reported.

Garza's murder still haunts the communities that line the Rio Grande, across the river from Mexico.

Feit was living in a retirement home in Arizona when he was indicted last year and extradited to Texas to stand trial in the case.

During five days of testimony, prosecutors called nearly two dozen witnesses, including a retired Trappist monk from a Missouri monastery who said Feit confessed to him that he had killed Garza.

Prosecutors also presented evidence that Catholic Church officials pressured local officials not to pursue Feit as a suspect in the initial investigation, partly because of fears that it could jeopardize John Kennedy's run for president at the time. Kennedy's Catholic faith was an issue in the campaign.An August 1960 letter from a Texas priest to another church official, which was entered into evidence, warned that bringing a lurid murder case against a Catholic priest "could make this a juicy scandal for the opposition to Kennedy."

The defense did not place Feit on the stand, instead pointing out inconsistencies in the prosecution's case, and stressing the absence of eyewitness testimony placing the priest and the victim together on the night Garza was last seen.