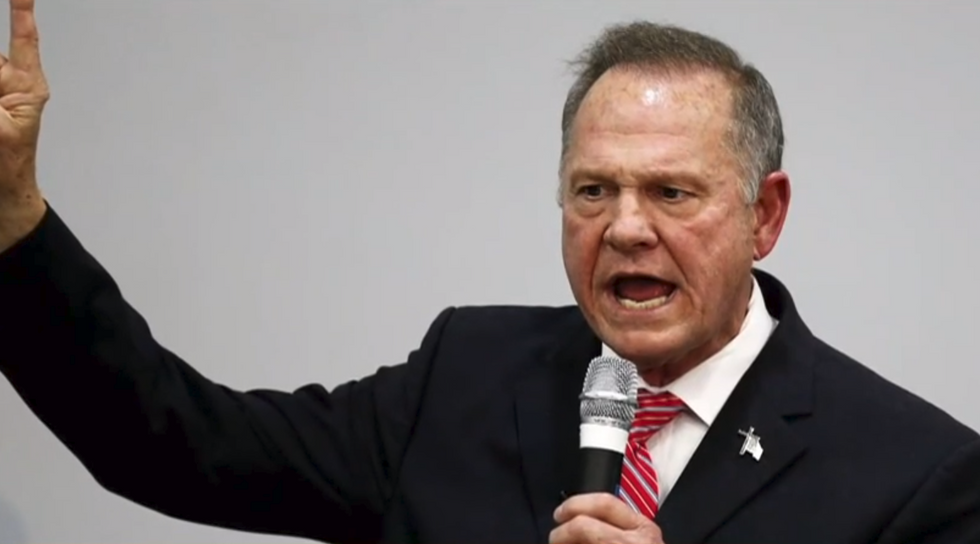 Former Alabama Supreme Court Justice Roy Moore is falling back on a litany of right-wing bogeymen to scare Alabama voters into voting for him as Democratic challenger Doug Jones remains neck-and-neck in the polls, said Politico on Saturday.

The bombastic and combative Moore is hitting back at child molestation accusations by doubling down on hot button racial and cultural issues in a move designed to energize his base of angry supporters.

His most recent campaign mailer's "first bullet point," said Politico, is a slam against Jones -- accusing the Democrat of supporting "players kneeling to protest the National Anthem," an issue that President Donald Trump has used successfully to stir up racial resentment against black athletes who are seen as insufficiently grateful for their success.

At a rally this week with fired White House chief strategist and Breitbart.com CEO Steve Bannon, Moore claimed that his shoestring campaign is under siege by the "Soros army," a reference to Jewish billionaire George Soros, one of the right wing's favorite punching bags.

To Fox News and talk radio conservatives, Soros is seen as an all-powerful puppet master who controls the American left and is purportedly part of conspiracy by "globalist" Jews to implement a "one-world government."

And of course, Moore has evoked the LGBTQ community, his most hated constituency. Moore has celebrated Russian President Vladimir Putin for his virulent intolerance and made blocking same-sex marriage the hill he was willing to die on as a state Supreme Court justice.

“They just don’t like conservatives like us,” Moore said of "outsiders" in a recent campaign ad. “They call us warmongers for wanting to rebuild the military, racists for wanting to secure the border and bigots for recognizing the sanctity of marriage and they call us foolish for believing in God.”

And finally, the Moore campaign has fallen back on that reliable Republican canard, voter fraud, already alleging that votes in the state have been tampered with.