Restaurants use 'menu psychology' to make you spend more money: Here are 7 techniques to avoid being suckered 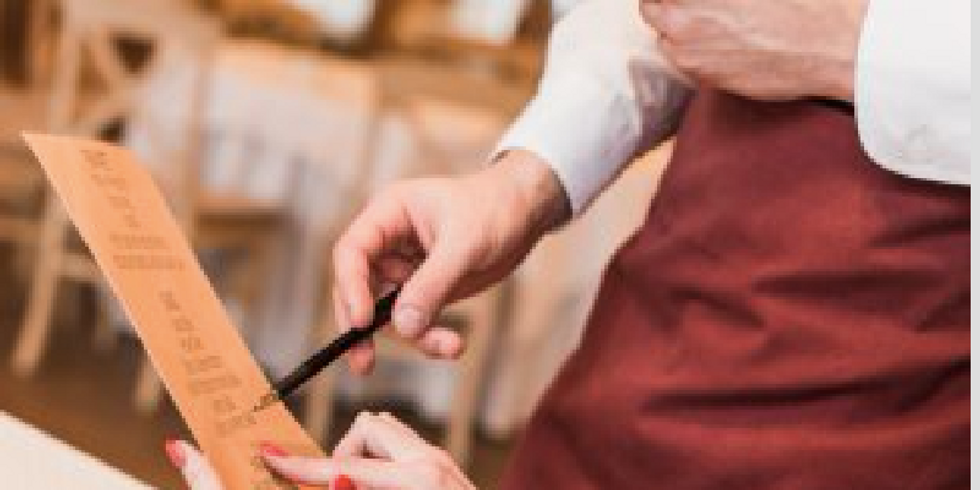 What would you rather order? A $10 bowl of mac-and-cheese or a $12 four-cheese baked pasta skillet topped with artisanal breadcrumbs?

For many, the dinner is in the details. The phrasing, placement, pricing, and other less obvious elements of presenting each dish on a restaurant menu may sway a meal order in ways diners are not even conscious of.

"Human beings are visual creatures; before we see or smell anything we look at it," says Cenk Fikri, principal and founder of restaurant consultancy Cenk Fikri Inc., which consults with chefs to design menus that sell dishes with a large profit margin.

Instagram has aided diners' abilities to visualize and predetermine whether a dish is worth ordering before even stepping foot in a restaurant. I recently met two colleagues for lunch, neither of whom even opened the menu at a restaurant none of us had been to before, as the popular photo-sharing app had already guided their meal choices. But the layout and strategically appealing, yet often subtle graphics on a menu can have a much greater influence on your order than you realize.

Ready to break out of the high-spending cycle of menu psychology? Let the experts deconstruct the menu-making process to help you eat what you're really craving during your next meal out.

1. Be aware of menu design.

"Using design as a method of attracting the customer's eye is a great way to increase the frequency of orders," says Kevin Gregory, the creative director of AllDay Industry, a restaurant consulting firm in New York City. "Common techniques include the use of boxing menu items or using lines to focus the eye on a certain area."

This boxing or special decoration can make customers think these adorned items are better or more special than the rest of the menu options—though this tactic is usually used to sell items with higher ticket prices and inspire a table to spend more.

Ask yourself, would you want to order the same dish if it were listed in a text-only column with a standard font?

"Psychology is important," Fikri says, especially when it comes to pushing items like pasta, which can be marked up a lot higher than, say, a steak.

Graphic design can visually add perceived value to a starchy entrée made from inexpensive ingredients and singling out items or larger portions can not-so-obviously convince diners to go big.

Take an American South concept Fikri worked on in the Middle East. While designing the menu, Fikri wanted his client to focus on the fried chicken. The fried chicken basket came with sides and was one of the higher ticket items on the menu. Attractive graphic design allowed the menu to highlight the fried chicken basket with homey borders and rustic style, adding character and visual appeal to the menu item before it even came out of the kitchen, and thus pushing the item as a quick mover.

"You can apply the same idea to different concepts," he says. The same idea that applies to fast-food combo meals, where adding fries and a drink costs the restaurant basically nothing, but the customers a few extra dollars, applies to restaurants at nearly every price point.

While a menu is essentially a price list, menu pricing strategies can actually convince customers to forget to consider the price of any specific menu item.

"Assume the menu item is $10. There are three ways to present this; $10, 10, or ten dollars," explains consumer psychologist Ari Zelmanow. Which one makes you feel most wary about swiping your credit card and which makes you feel calm and collected about spending that amount on a peppermint mocha?

Cornell University’s research on menu design and price presentation shows that presenting an item numerically; that is, removing the dollar sign, sells more food items. "The reason this happens is that people are naturally inclined to avoid pain, and the dollar sign [or] reference activates the pain center of the brain," explains Zelmanow. "The number alone—sans dollar sign—doesn't activate this."

Eliminating the dollar sign (or any currency sign) altogether is a proven tactic that restaurants of various price points use to lure in higher grossing orders from diners.

3. Don't be fooled by anything 'famous.'

"The use of specific words and phrasing encourages guests to order certain items," says Gregory. “Something we see a lot in the industry are items labeled with 'signature' or 'famous' or 'original.' These words help these items to stand out and assert their position as a more desirable item. Why order a simple item when you can have something signature or more special?"

Spoiler: It's probably not at all special, and generic enough that whoever designed the menu felt a need to put a recognizable yet broad, emotionally suggestive adjective to push the sub-par eggplant parmesan. In all restaurants, every dish should be "original" and if they truly are "famous," you should already know why.

For signature items, consider asking the server or even the chef what makes the dish unique, how they conceived of it and if it's changed over the years. Getting the true story of what's behind a chef's "signature" dish may better inform if it's worth splurging for.

Play editor and use a mental red pen to eliminate all the meaningless adjectives that may sway your order. Unless the word actually describes how an item tastes (like spicy, sour or sweet), consider it useless.

According to a study by Cornell University, the item described by an arbitrary adjective increased both the perceived value of the menu item and increased the eaters' perception of the dish's flavor. "Those who ate foods with evocative, descriptive menu names generated a larger number of positive comments about the food and rated it as more appealing, tasty and caloric than those eating regularly named counterparts," according to the researchers.

"Another way of attracting higher purchases, a tool that I use often, is to create a centralized theme of describing the dishes," says Gregory. "Whether that theme comes across in the actual naming of the items or in the design, the goal is to shift the focus away from the prices and instead to the aesthetics, sophistication, or even the comedy of the menu. This also creates a lasting impression, giving the guests an experience more than just staring at a simple white page.”

Before reciting a list of punnily named sides to your server, consider what actual food you want to taste (and pay for).

All you really need on any given menu is one dish that appeals to your cravings. Just ask any vegetarian, vegan, lactose-intolerant or gluten-free diner who usually already knows what she will order before entering any restaurant, thanks to confirming that a token whatever-free dish exists on the menu. In recent years, many restaurants have limited their menu items, according to Fikri, and many who have sat down at a trendy urban restaurant are familiar with the single-page menu board, listing starters, entrees and sides all on one single (often narrow) page.

"[Chefs] want to be identified with their concept, don't want to overwhelm the customer and want to draw attention to what they want to sell," Fikri says. Why add superfluous items when you want to be known for your black cod pastrami and seared salmon skewers?

Offering fewer items is more advantageous to both the restaurateur and the diners (assuming everyone in your party shares similar tastes). Shorter menus move product faster—the more ingredients you need on the menu the slower each product typically moves—meaning you're more likely eating fresher, more dependably sourced ingredients.

Unless you're eating at a diner, consider opting for restaurants without the 20-page menu.

7. When in doubt, go Michelin.

Today's restaurants are all about describing dishes with fun, catchy terms and stories (what does farm-to-table even mean anymore?), and even wine descriptions at restaurants are becoming "easier to understand," according to Fikri.

Unless you're a sommelier or wine aficionado, chances are you won't be able to identify every bottle on any restaurant list, but how many times has the suggestion of “notes of vanilla” or “baked stonefruit" lured you into purchasing a glass of wine you know nothing about?

"The snobbery of, say, a two-star Michelin star restaurant assumes you know what you're ordering," says Fikri. You're not going to find cute monikers on menus of verifiable, esteemed success. "There’s not as much psychology involved, you're relying on the reputation of the chef."

Melissa Kravitz is a writer in New York City who writes about food and culture for First We Feast, Thrillist, Elite Daily, Edible, and other publications.