Roy Moore lost because most Christians are better than the Bible 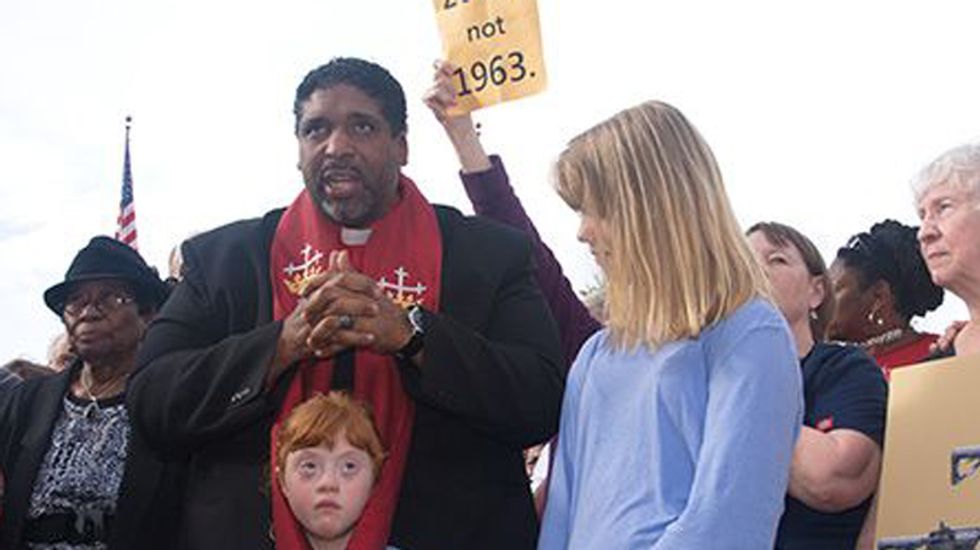 Thoughtful Alabama Christians stepped across divide.  How about us?

I’ve said before that the alleged behavior of Alabama Senate Candidate Roy “10 Commandments” Moore toward teenage girls was perfectly biblical. I’ll stand by that, citing chapter and verse.  (Other Christians or former Christians have made similar observations.) The Bible is a mishmash of texts that were written and assembled over the course of several hundred years by men with varied objectives. All manner of behavior and misbehavior can be and has been justified from the contradictory stories and commandments between its covers. Men like Roy Moore who think they speak for God, who think their end justifies any means, play this to their own advantage.

Fortunately, most Christians are better than that. Where the Bible contradicts itself or endorses archaic cruelties or tribal thinking, their own conscience guides them toward something higher. Since the Iron Age, when most of the Bible texts were written, humanity has gotten clearer about kindness and justice and how people in power should behave toward those who are less powerful. We have evolved a more expansive view of who deserves to be treated according to the Golden Rule.

That includes many Bible believers. (In fact, when the Bible is understood not as a literally perfect and complete word of God but as a record of our ancestors struggling to understand what is real and what is good and how to live in moral community with each other—and when the texts of the Bible are rearranged in chronological order—these trend lines can be seen in the Bible itself.)

This is why in the lead up to the American Civil War, Christian abolitionists drew on the dictates of conscience and then elevated Bible verses that teach compassion and equality rather than those that endorse slavery. It is why some denominations, like the Plymouth Brethren, have taken a stance of pacifism despite tale after tale of divinely sanctioned violence in the book they consider most sacred. It is why others, like the United Church of Christ, are struggling toward a norm of gender equality despite the fact that the Old Testament reflects an Iron Age understanding of females as chattel—economic property of men.

And it is why many Christians, including Evangelical literalists, recognize Moore’s behavior as exploitative or predatory even though Bible stories and commandments endorse similar behaviors.

From the outside, the 2017 Alabama Senate race has been an orchestra of ugliness: a chorus of well-vetted allegations that the staunchly theocratic Moore both pursued and pawed young teens  while an assistant district attorney;  Moore’s shrill denials and claims that the women were lying; his defenders’ counterpoint that nothing is wrong with a thirty-something lawyer hitting on middle school girls; the dulcet tones of Moore’s (much younger) wife defending his character and listing pastoral endorsements, and, of course, the Moral-Paragon-in-Chief chirping that Moore will “always vote with us”—because isn’t that what Red State faithful most want to hear?

Moore’s fans see him as an icon and defender of Evangelical Christianity. So, it is not without reason that many outsiders have concluded that Evangelicalism is morally bankrupt. It may be satisfying to think so—Christians aren’t the only ones who like feeling righteous—but the truth is rather more complicated than that.

Anyone who knows me as a former Evangelical knows that I’m not going to defend Evangelical ideology or the peculiar status that many Evangelicals accord to the Bible, which I think a form of idolatry. But ordinary Christians aren’t cartoon characters; human beings are always more complex and often a great deal better than the ideologies they get sucked into, and that includes Evangelicals.

Sure, the Church includes men like Moore and the pedophilia apologists who have taken to the airwaves on his behalf. It includes con artists like Creflo Dollar. It includes atavistic patriarchs like Mark Driscoll who parrot the woman-demeaning mantras from the Bible and Church leaders past. It includes people with such tunnel vision that they think being anti-abortion makes one pro-life. It includes tone-deaf youtube hipsters who proclaim that their oh-so-dope religion isn’t actually a religion. And like any institution, the Church is rife with more mundane manifestations of selfishness, exceptionalism, greed, dishonesty, and pettiness. But that is not the whole picture.

My own church included a youth minister whose idea of leadership was getting to be first in line when the teens went waterskiing. Meanwhile, though, unpaid volunteer members with an ideal of “servant leadership” patiently coached beginning skiers even if it meant that they themselves never got wet.

My church included a self-certain associate pastor who advised my 90-lb. sister to “pray and stay” when her husband became abusive. But after that husband crossed someone bigger and better armed than my sister–and got himself shot—members of the same congregation brought food for weeks and, then in the years that followed, helped her fix her plumbing, keep her house repaired, and raise her kids.

My church included people who thought my gay brother was evil and slated for hell, and others whose love for him forced them to confront the atrocious theology of eternal torture. It included paid “friendship missionaries” who exploited the loneliness of foreign students to win converts; and volunteers who simply helped in the soup kitchen no matter what.

In other words, it included cold-heartedness and compassion, self-righteousness and humility, dogma and discernment, greed and generosity, exploitation and altruism. And it often included all of these inside the same individuals, because each of us is big enough to contain a legion of contradictions—just like the folks who wrote Bible.

A lot of progressives are appalled by the recent choices and priorities of people who claim to be followers of Jesus. A lot of us—especially former Christians—think that Bible-belief makes people worse, not better, that instead of being a light on a hill, Christianity has become the surrounding darkness. Count me among the appalled. Count me among the folks who think that Moore’s behavior may actually—at least in part—derive from his bibliolatry. Worship Iron Age texts and you get Iron Age behavior.

But we need to give credit where it is due. As 2017 comes to a close, Alabama Christians who didn’t vote as expected have given our country a chance to take a pause from the dawn-to-dusk outrage and reciprocal jeering that passes these days for political discourse. In this dark winter of the American soul, that is a gift. They have given us a small reminder that few of us are as unidimensional as we appear on social media. And that seems like a good message to carry into the holidays.

"The View" started off the Tuesday show dealing with the bombshell report from the Daily Beast revealing that self-proclaimed "pro-life" Republican Senate candidate, Herschel Walker, paid for an abortion for one of his exes in 2009. Walker took to Twitter and Fox's Sean Hannity to deny the claim and continues to deny the claim. The woman has the receipt, a bank deposit and a get-well card.

It resulted in Walker's son, Christian, unleashing and attacking his father for lying, for abuse, violence and hypocrisy, while claiming he's living life as a Christian.

This year's physics Nobel prize was awarded Tuesday to three men for their work on a phenomenon called quantum entanglement, which is so bizarre and unlikely that Albert Einstein was skeptical, famously calling it "spooky".

So how exactly does it work?