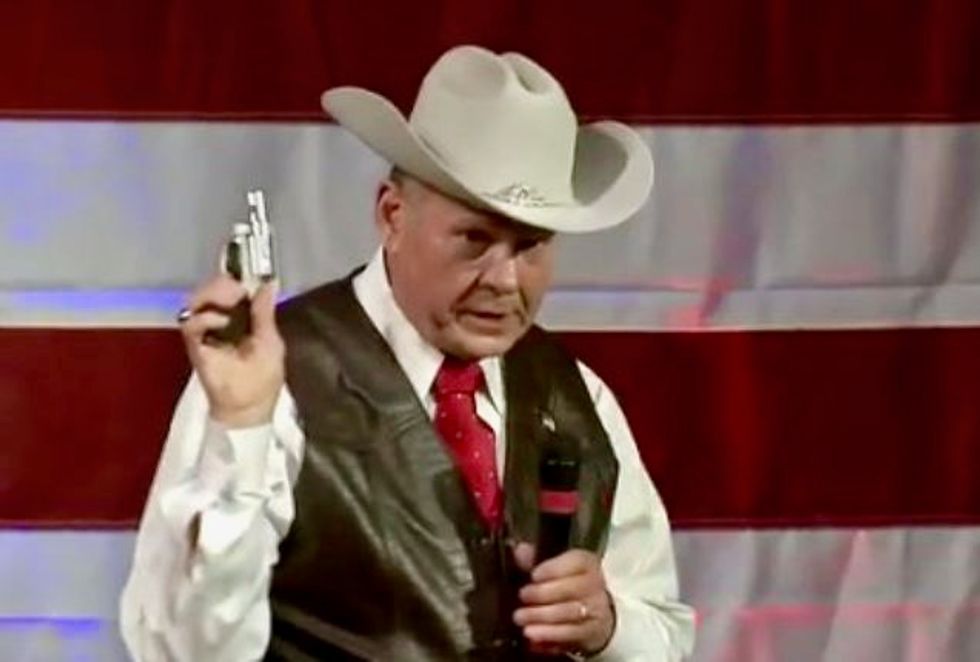 Roy Moore pulls out a gun at a campaign rally before Alabama Republicans headed to the polls in the state's Senate GOP primary runoff (image via Christian Wilkie/Twitter).

Richard Charnin, the purported "expert" in voter fraud who has been cited by the Roy Moore campaign to claim that Democrat Doug Jones did not legitimately win this month's Alabama Senate special election, is a notorious conspiracy theorist who has claimed that he has "mathematically proved" that there was a vast conspiracy to assassinate former President John F. Kennedy.

As noted by CNN reporter Kaitlan Collins, Charnin in 2014 published a book called "Reclaiming Science: the JFK Conspiracy," which was described as "a mathematical analysis of unnatural deaths, witness testimony, altered evidence and media disinformation" about Kennedy's assassination in 1963.

In essence, the book examines purportedly "unnatural" deaths of key people related to the supposed assassination plot -- and concludes that it's mathematically impossible for their deaths to be a coincidence.

"Reclaiming Science: The JFK Conspiracy is based on a statistical analysis of unnatural JFK-related deaths, Dealey Plaza eyewitness observations, medical, acoustic and photographic evidence," reads the book's description. "Warren Commission defenders and the Corporate Media avoid the evidence and continue to promote the bogus Single Bullet Theory and that Oswald was the lone shooter, despite overwhelming evidence that he was not on the 6th floor of the Texas Book Depository."

Collins says that Charnin has written extensively on his personal blog about both voter fraud conspiracies and has also calculated the probabilities that the DNC had former staffer Seth Rich murdered to cover up his ties to WikiLeaks.