Roy Moore's wife preempts accusations of anti-Semitism: 'One of our attorneys is a Jew!' 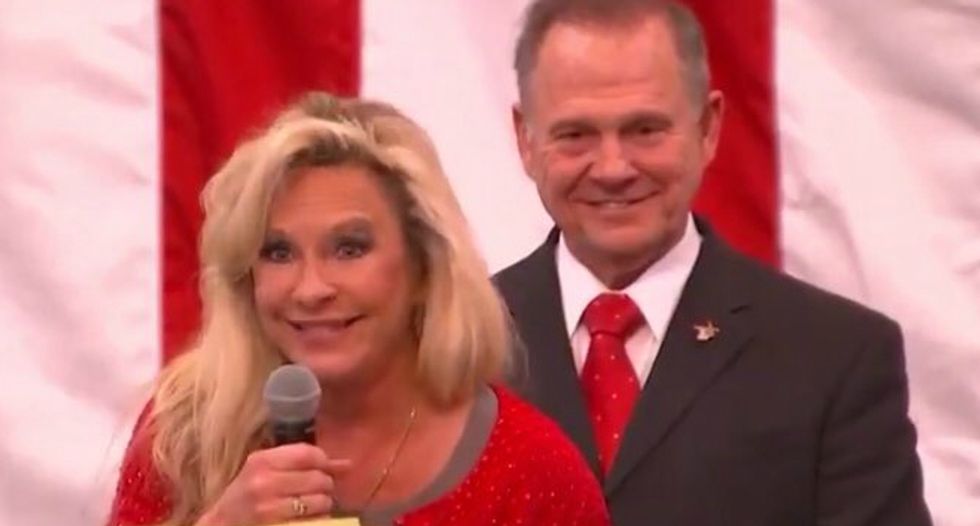 Kayla Moore (left) and Roy Moore (right), moments after the former claimed she and her husband can't be anti-Semitic because they have a Jewish lawyer. Image via screengrab.

On the eve of the special election that will decide the fate of Alabama's open Senate seat, Kayla Moore, the wife of the controversial GOP candidate, decided to "set the record straight" on accusations of anti-Semitism against her husband.

"Fake news will tell you that we don’t care for Jews," Washington Post reporter turned Trump punching bag Dave Weigel tweeted, quoting Kayla Moore. "One of our attorneys is a Jew!"

Kayla Moore says it's a lie that she and @MooreSenate don't like Jews. "I just want to set the record straight whil… https://t.co/rUuXMqxSL2
— Cameron Joseph (@Cameron Joseph)1513043847.0

Last month, after the initial accusations against Moore were published in the Post, many Alabama voters received a mysterious robo-call from someone who identified himself as "Bernie Bernstein" that claimed to work for the newspaper. "Bernstein" said he would give money to women who would come forward with fake accusations about Moore, a popular talking point among right-wing pundits at the time. The Post denied that any such reporter existed soon after, and many noted that the name appeared to be playing on anti-Semitic tropes.

Watch video of the Moores smiling while discussing how having a Jewish lawyer bars them from being anti-Semitic below.