Sally Yates calls for uprising of Americans to 'stand up, speak out' and relocate 'core values' 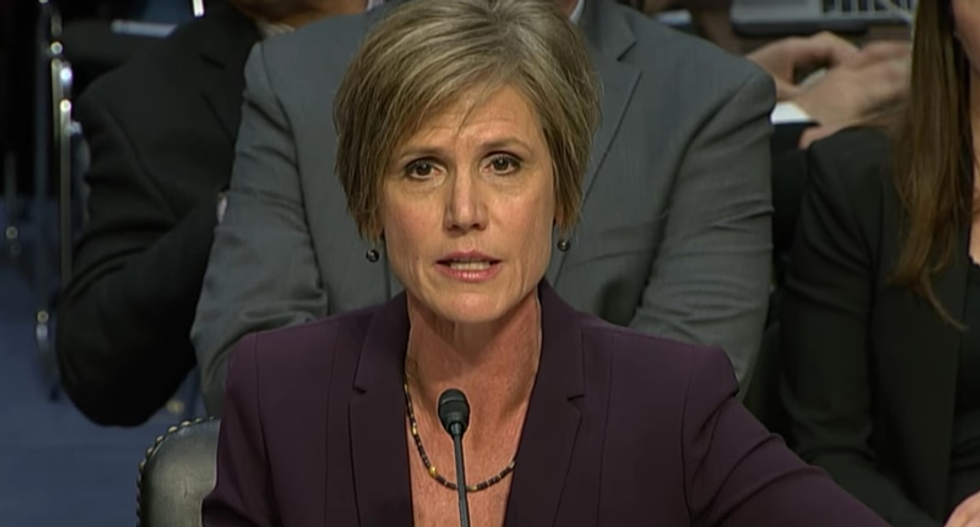 The United States is at another critical moment in history where Americans must decide what kind of country they want to be. That's what former acting Attorney General Sally Yates wants the country to understand.

In an op-ed for USA Today, the foe of President Donald Trump once tried to warn and help the administration, only to be thrown out of office. Yates thinks this is part of a calling for Americans to decide if they'll uphold the "country's core values."

"Our founding documents set forth the values that make us who we are, or at least who we aspire to be," Yates wrote. "I say aspire to be because we haven’t always lived up to our founding ideals — even at the time of our founding. When the Declaration of Independence proclaimed that all men are created equal, hundreds of thousands of African Americans were being enslaved by their fellow Americans."

She recalled the Jim Crow South when Americans were forced to decide whether they wanted to be defined by lynchings or a promise of equal justice. While Americans have sometimes fallen short of what it strived for, Yates explained that they still shared a vision of what the country meant and what was expected of leaders.

She listed values that unite the United States and asked Americans to look back at the Preamble to our Constitution to harness the inspiration:

“'We the people of the United States' (we are a democratic republic, not a dictatorship)," Yates wrote. "'In order to form a more perfect union' (we are a work in progress dedicated to a noble pursuit) 'establish justice' (we revere justice as the cornerstone of our democracy) 'insure domestic tranquility' (we prize unity and peace, not divisiveness and discord), 'provide for the common defense' (we should never give any foreign adversary reason to question our solidarity) 'promote the general welfare' (we care about one another; compassion and decency matter) 'and secure the blessings of liberty to ourselves and our posterity' (we have a responsibility to protect not just our own generation, but future ones as well)."

She explained that the Bill of Rights similarly gets to the point of allowing for individual liberty and other rights that Americans are taking for granted.

"But without vigilance can erode and slip away, such as freedom of speech (our right to protest and be heard); freedom of religion (the essential separation between how one worships and the power of the state); and freedom of the press (a democratic institution essential to informing the public and holding our leaders accountable)," she continued.

The rule of law is generally another essential principle, according to Yates. It implied we are approaching a lawless world in which any possible criminality on the part of the president could be ignored by portion of the citizens.

"The promise that the law applies equally to everyone, that no person is above it, and that all are entitled to its protection," she wrote. "This concept of equal protection recognizes that our country’s strength comes from honoring, not weaponizing, the diversity that springs from being a nation of Native Americans and immigrants of different races, religions and nationalities."

Yates noted that one thing that separates the United States from an autocracy is the "strict separation between the Justice Department and the White House on criminal cases and investigations." It should ensure the public would believe in the legitimacy of the criminal process. Truth is another thing that ensures the U.S. doesn't stumble drunkenly into an autocracy.

"There is such a thing as objective truth," she explained. "We can debate policies and issues, and we should. But those debates must be based on common facts rather than raw appeals to emotion and fear through polarizing rhetoric and fabrications."

She said that failing to tell the truth is important. If Americans can't trust their public servants and fail to hold them accountable for lies, "we look the other way and normalize an indifference to truth."

She closed with a powerful call to action:

“We are not living in ordinary times, and it is not enough for us to admire our nation’s core values from afar...So stand up. Speak out.”