Sarah Sanders' dad says Chelsea Handler is barren and 'jealous': Instead of raising kids, she 'aborted them' 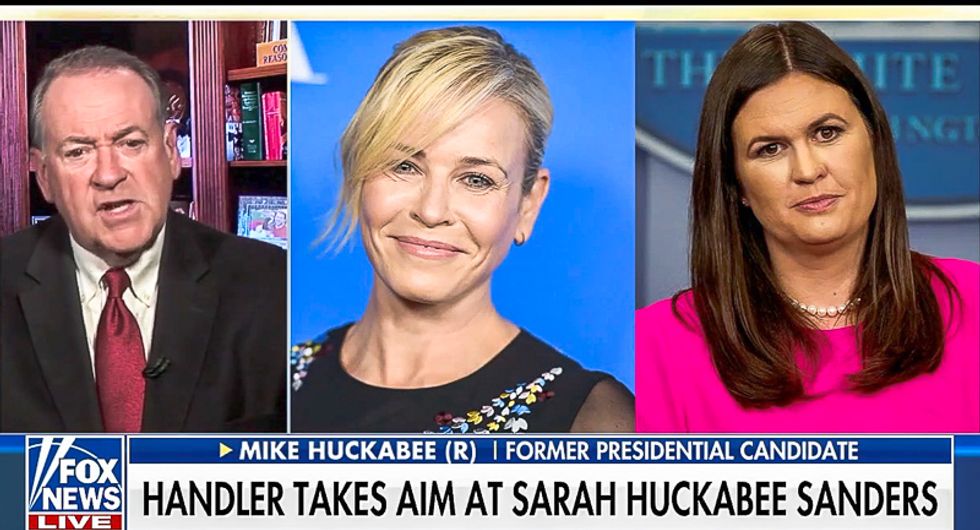 Former Arkansas Gov. Mike Huckabee (R) suggested on Wednesday that Chelsea Handler was jealous of his daughter, White House Press Secretary Sarah Sanders, because she has a family instead of "two abortions."

The hosts of Fox & Friends asked Huckabee to respond after Handler joked about Sanders' hair and makeup.

“I mean, one day she has no makeup on at all. The next, she’s got six-foot-long eyelashes, cleavage and summer whore lipstick all over her face," Handler reportedly said on a recent talk show. “Can you believe what they’re turned her into? A proper trollop.”

Huckabee said that he felt "sorry" for Handler.

"I'm surprised that there were not women on the left who at least had the decency to call her out for this," Huckabee opined. "I know you're probably expecting me to be very angry about this, but truthfully, when I read what she said and then I watched it, I felt sorry for her."

"I feel sad for Chelsea Handler," he continued. "She seems like a very angry and bitter person. Look, she's almost as old as me. So this is a point in her life, she needs to start mellowing out. And she seems to be just in a rage. The sad thing about it, she boasts about the two abortions she had at 16. I think in many ways she's jealous of my daughter."

According to the former governor, "there's something deep inside of Chelsea Handler that says, 'I've missed out on a lot, I could be raising children, but I aborted them.'"