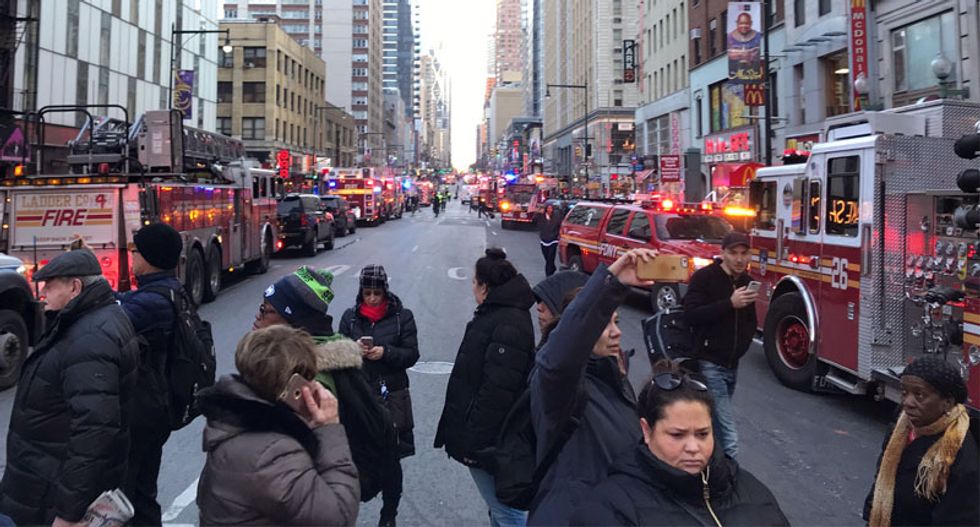 Police and fire crews block off the streets near the New York Port Authority in New York City, U.S. December 11, 2017 after reports of an explosion. REUTERS/Edward Tobin

An explosion rocked New York's Port Authority, one of the city's busiest commuter hubs, on Monday morning and police said one suspect was injured and in custody but that no-one else was hurt in the rush-hour incident.

Police confirmed one person was in custody but were not yet identifying the device used. Local news channel WABC cited police sources as saying a possible pipe bomb detonated in a passageway below ground at Port Authority and WPIX cited sources as saying a man with a “possible second device” has been detained in the subway tunnel.

The bus terminal was temporarily closed, the Port Authority of New York and New Jersey said in a Twitter statement.

“There was a stampede up the stairs to get out,” said Diego Fernandez, one of the commuters at Port Authority. “Everybody was scared and running and shouting.”

New York City Mayor Bill de Blasio and President Donald Trump have been briefed on the incident, according to local media and the White House.

News of the incident jarred financial markets as trading was getting underway for the week. Standard & Poor's 500 index emini futures pared gains, the dollar weakened against the yen and U.S. Treasury securities prices gained on a modest flight-to-safety bid.

The incident occurred less than two months after an Uzbek immigrant killed eight people by speeding a rental truck down a New York City bike path, in an attack for which Islamic State claimed responsibility.

In September 2016, a man injured more than two dozen people when he set off a homemade bomb in New York's Chelsea district.