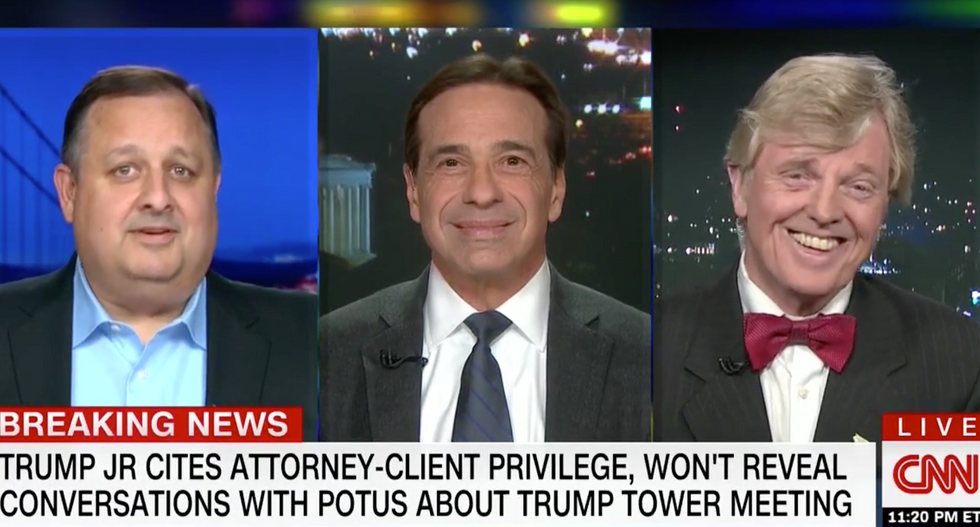 A former federal prosecutor on Wednesday piled on Donald Trump and his associates after Donald Trump Jr. invoked attorney-client privilege to protect conversations between himself and his father.

Discussing reports that Trump Jr. refused to disclose information about conversations between himself and Trump while speaking before the House Intelligence Committee, John Flannery—like other legal analysts—expressed disbelief over that excuse before arguing the Trump family members are far from criminal masterminds.

“It’s not electricity, like if you have an attorney in the room it's enough,” Flannery said of Trump’s invocation of attorney-client privilege. “They were talking about disclosing information, and if you are having a discussion to disclose information, it is not privileged. On top of that, if you are using the privilege to conceal fraud then the privilege takes flight.”

“I think it was just a delay to avoid talking about it today,” Flannery added.

Former Director of the United States Office of Government Ethics, Walter Shaub, pointed out that Trump Jr.’s refusal on Wednesday was one in a series of bizarre claims involving Trump family lawyers.

“This certainly hasn't been a great week for the Trump family’s attorneys,” Shaub said. “Between one of them claiming he wrote a bizarre tweet, another claiming that a president can't be held liable for obstruction of justice, and now whoever gave Donald Jr. that advice that he has attorney-client privilege.”

“I was pretty excited to hear that, because I thought, ‘I'm an attorney and I talk to myself a lot, maybe my ramblings and murmurings are privileged as well,’” Shaub joked.

“What's really going on?" Flannery asked. "What’s going on is to conceal the fact of the meeting with the Russians they kept saying never happened.”

“So their first imperative, certainly Mr. Trump and Trump Jr., was to say, nothing,” he continued. “Say, ‘It is about an adoption’ when it had nothing to do with it. They knew when they proposed it.”

“We are just lucky these people are bad at this,” Flannery said. “Otherwise, I used to say as a prosecutor on a white collar case, ‘You don't catch the geniuses.’ These guys aren't geniuses. This is the worst cover-up I have seen. I'm glad for it. Otherwise, we wouldn't have a chance of getting at their misconduct, and their misconduct was to conceal the deal with the Russians and all the conversations they had with them.”