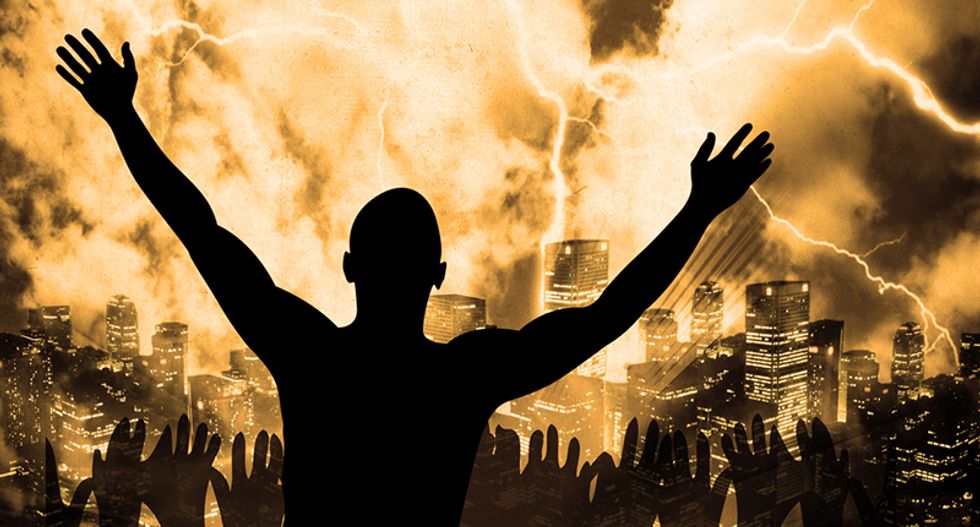 In a Pensacola, Florida rally Friday evening, Republican state Senator Doug Broxson suggested to supporters of Donald Trump that the president’s controversial decision to move the U.S. Embassy in Israel from Tel Aviv to Jerusalem may usher in the biblical end times.

“Now, I don’t know about you, but when I heard about Jerusalem — where the King of Kings [applause] where our soon coming King is coming back to Jerusalem, it is because President Trump declared Jerusalem to be capital of Israel,” Broxson predicted. The crowd cheered.

This week, theological scholar Dr. Diana Butler Bass wrote a Twitter thread explaining the link between recognition of Jerusalem, evangelical Christians, and the apocalypse. That is important because rebuilding the Temple is the event that will spark the events of the Book of Revelation and the End Times."

According to Bass, the counsel of evangelical adviser that Trump surrounds himself with take such "End Times" prophecies literally

"Of all the possible theological dog-whistles to his evangelical base, this is the biggest," she continued. "Trump is reminding them that he is carrying out God's will to these Last Days. They've been waiting for this, praying for this. They want war in the Middle East. The Battle of Armageddon, at which time Jesus Christ will return to the Earth and vanquish all God's enemies."

She warned that for some evangelicals this is considered a "climax of history."

"And Trump is taking them there. To the promised judgment, to their sure victory. The righteous will be ushered to heaven; the reprobate will be banished to hellfire," Bass went on. "People believe this. Really believe this. Have given their lives to these ideas, sing about them in their churches, evangelize others, teach them in Sunday schools. And, this morning, with the news of Jerusalem, these people are ecstatic. This is the fulfillment of biblical prophecy. And Donald Trump is not only acting on a campaign promise, but enacting a theological one."

She went on to explain that the reason many white evangelicals supported Trump to the tune of 80 percent is more than an abortion issue. Many actually believe that Trump is unfolding God's purpose.

"They believe that Donald Trump is God's instrument to move us closer to the Rapture, the Judgment, and the End," she wrote. "Because to them, that's actually the beginning -- the beginning of their reward and heavenly bliss."

Other religious groups might raise hell about the disruption of peace and stability, but Bass explained that evangelicals don't care because they're anticipating peace in another world than the Earth.

"What matters is that Jesus comes back in Judgement," she continued. "To these sorts of Christians, that Judgment is the only true peace. Everything is phony, deceptive, even evil. Millions of American Christians believe all this. Millions of Trump voters. Sacred history is unfolding right now because of Donald Trump and God. They've based their faith, their identity, their purpose, their eternal lives on these ideas. Trust me. There's no arguing with any of it."

Dr. Robert Jeffress, the senior pastor of First Baptist Church in Dallas celebrated Jerusalem officially becoming the capital of Israel because it will be where Jesus Christ returns.

The United Church of God names the 7 prophecies that foretell the second coming of Christ.

1. The human race would have the ability to exterminate itself (nuclear weapons)

2. A Jewish homeland had to be reestablished in the Middle East (Trump has now proclaimed Jerusalem the capital)

“At the time of the end the king of the South shall attack him; and the king of the North shall come against him like a whirlwind, with chariots, horsemen, and with many ships; and he shall enter the countries, overwhelm them and pass through. He shall also enter the Glorious Land [the Holy Land], and many countries shall be overthrown” (Daniel 11:40-41).

5. End-time rise and fall of Israel and Judah

6. The gospel will be preached in all the world (YouTube)