Tom Brokaw says Dems railroaded Franken: 'The people who sent him to Washington were left out of the decision' 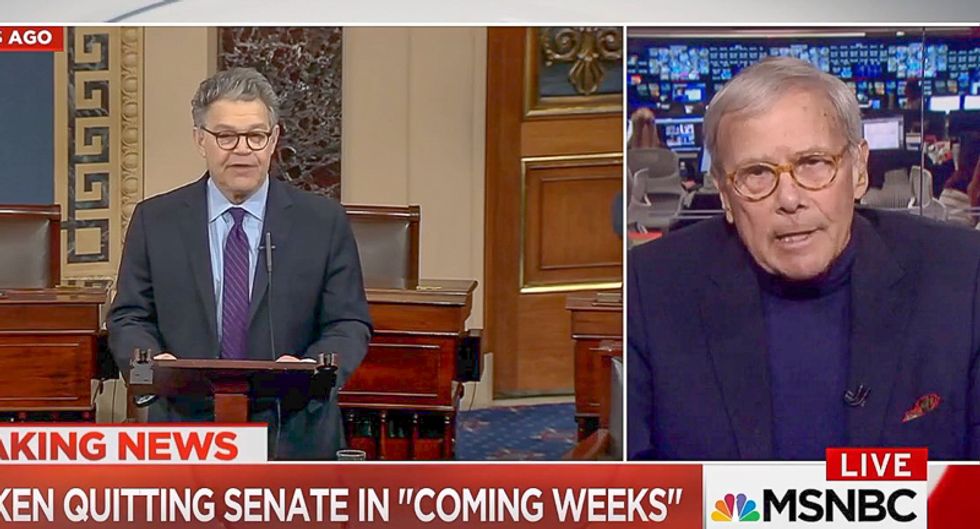 MSNBC contributor Tom Brokaw responded to Sen. Al Franken's (D-MN) decision to step down by noting that he had been driven out by his Democratic colleagues without a say from the people who elected him.

"There was on the part of the Democratic Party a determination and a rush, if you will, to have the senator resign and so they didn't have the burden of trying to defend him if they go forward," Brokaw said, while acknowledging the evidence against Franken.

"I do think that those in government and those of us in this business as well have to agree to a kind of codification of what is objectionable and how people should be held responsible for it," he explained. "When you stop and think about -- as he raised -- the Moore case and the president of the United States, those are entirely different kinds of charges of abuse."

"But in Al Franken's case, there was still enough murkiness that a lot of people could not make up their mind," Brokaw pointed out. "Finally, what I would say is, the people who sent him to Washington were left out of this decision. The voters of Minnesota really had no role in it."

"He was driven out by members of his own party and by his own conscience," the veteran broadcaster concluded. "We are in a transformation, not just in this case, but the kinds of people we elect to office, the man that we have in the Oval Office right now in an era the likes of which I have not seen before."