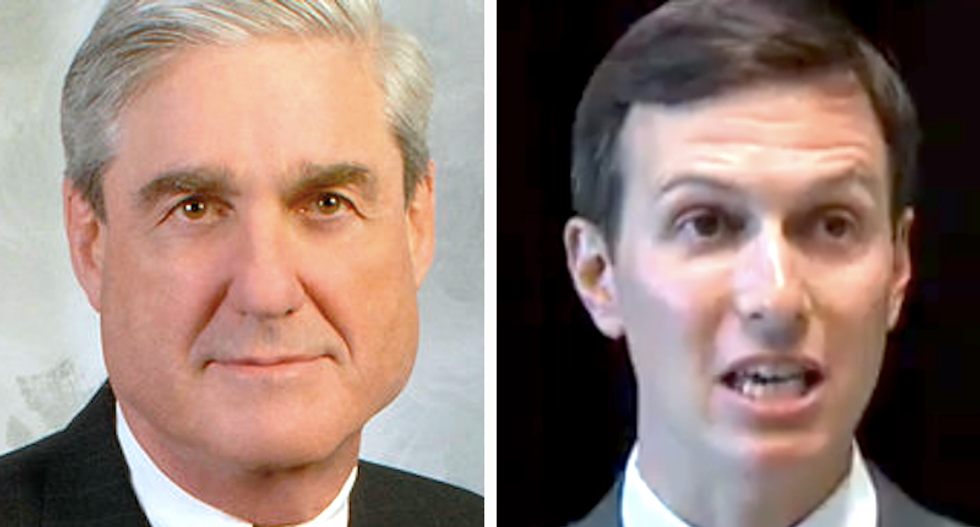 Robert Mueller has personally sat in on FBI interviews of witnesses in his probe of Russian election meddling and potential obstruction of justice, a new Washington Post expose reports on the "secretive nerve center" used by the special counsel.

Investigators have been particularly interested in son-in-law Jared Kushner's interactions with former National Security Advisor Mike Flynn, who "flipped" and is now informing the prosecution.

"Once inside, most witnesses are seated in a windowless conference room where two- and three-person teams of FBI agents and prosecutors rotate in and out, pressing them for answers," The Post explained. "Among the topics that have been of keen interest to investigators: how foreign government officials and their emissaries contacted Trump officials, as well as the actions and interplay of Flynn and Jared Kushner, the president’s son-in-law."

Kushner is one of over two dozen people who have been interviewed by Mueller's team in the last ten weeks.

"Mueller’s group has also inquired whether Flynn recommended specific foreign meetings to senior aides, including Kushner. Investigators were particularly interested in how certain foreign officials got on Kushner’s calendar and the discussions that Flynn and Kushner had about those encounters, according to people familiar with the questions," The Post reported. "During the transition, Kushner and Flynn met with the Russian ambassador to the United States, Sergey Kislyak. At the early December meeting, Kushner suggested establishing a secure communications line between Trump officials and the Kremlin at a Russian diplomatic facility, according to U.S. officials who reviewed intelligence reports describing Kislyak’s account."

"The volume of questions about Kushner in their interviews surprised some witnesses," The Post noted.

“I remember specifically being asked about Jared a number of times,” one witness said.

Some of the questions about Kushner show that Mueller team's focus on potential obstruction of justice by the Trump administration.

"Another witness said agents and prosecutors repeatedly asked him about Trump’s decision-making during the May weekend he decided to fire FBI Director James B. Comey. Prosecutors inquired whether Kushner had pushed the president to jettison Comey, according to two people familiar with the interview," The Post explained.