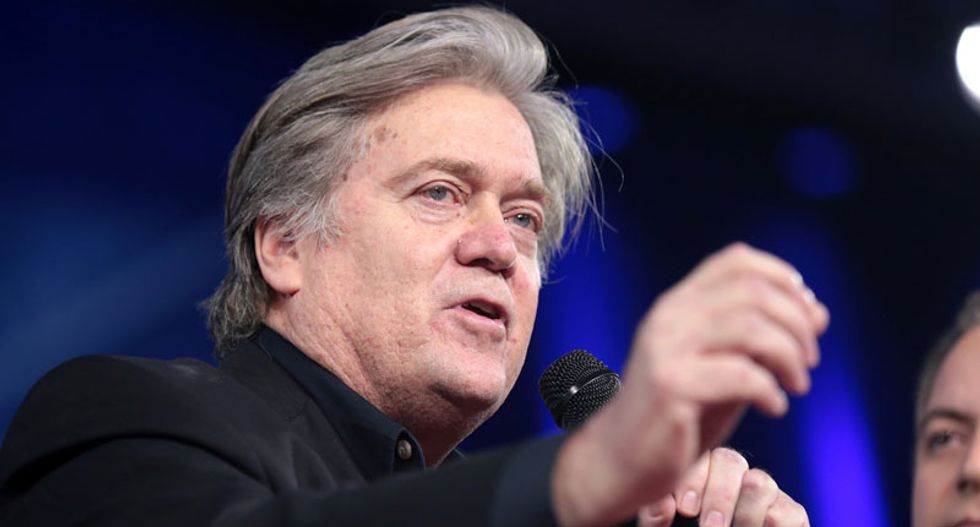 (Reuters) - A day after President Donald Trump endorsed U.S. Senate candidate Roy Moore of Alabama, Trump's former chief strategist Steve Bannon campaigned in the state, telling a crowd that allegations of sexual misconduct against Moore were part of a smear campaign to keep him from office.

"They want to destroy Judge Roy Moore and you know why?" Bannon asked at the rally in Fairhope, Alabama. "They want to take your voice away."

Trump originally supported Moore’s opponent in the Republican primary, Luther Strange, who was favored by Senate Majority Leader Mitch McConnell and other members of the Republican establishment. Moore defeated Strange in the primary and now faces Democrat Doug Jones in the Dec. 12 special election to replace Jeff Sessions, who became U.S. Attorney General in the Trump administration.

Bannon, who left the White House in August after a power struggle and rejoined the Breitbart News Network right-wing website, was a major proponent of Trump’s “America First” agenda during the 2016 election campaign.

Trump, Bannon said, "understands where Roy Moore stands." He called the Alabama Senate race "a referendum on the Trump program."

Moore, 70, has been accused of sexual misconduct with teenage girls when he was in his 30s. Moore denies the allegations. Reuters has not independently verified the reports.

The allegations initially had Trump keeping his distance from Moore, but he has grown more vocal in his support this week, as public opinion polls show Moore holding a slight lead over Jones.

Bannon remained steadfast in support of Moore. Bannon has pledged to back candidates in Senate primaries next year who oppose retaining McConnell as the Senate’s leader, contending that he has stalled Trump’s policy agenda.

When the accusations against Moore were first reported, McConnell called on Moore to drop out of the race. More recently, however, McConnell has tempered his view, saying Alabama voters should determine whether Moore should be elected.

"The folks in Alabama were always going to decide, Mitch," he said. "They have no interest in what you have to say."

And while Republicans appear divided over Moore’s candidacy, Trump’s endorsement prompted the Republican National Committee to reverse course and expend resources to back Moore.

The RNC cut ties with Moore last month when the accounts of women who said he had sexually abused them were reported in the Washington Post.