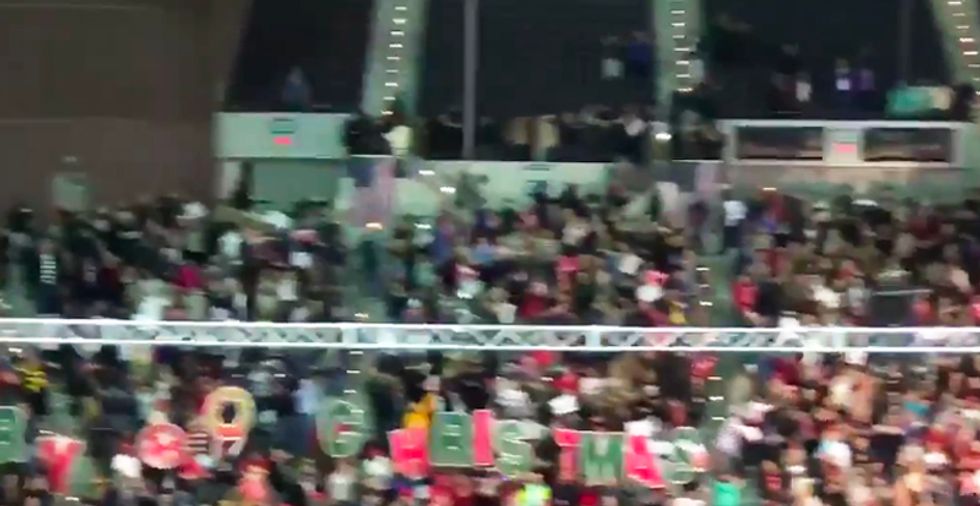 Note: This article contained a number of false claims and has been retracted. According to a local media source, "By the time Trump spoke, the Bay Center appeared to be crowded, with several hundred people left outside because they arrived after the doors were locked."

President Donald Trump boasted of "packed to the rafters" crowds for his Friday night campaign rally in Pensacola, Florida. Photographic evidence from the arena venue for his speech tells a different tale, harkening back to inflated inauguration crowd claims.

Tuesday is the special election for the Alabama senate seat vacated by Attorney General Jeff Sessions.

"Great evening last night in Pensacola, Florida. Arena was packed to the rafters, the crowd was loud, loving and really smart," Trump claimed. "They definitely get what’s going on."

The internet disagreed that the crowd was big, packed to the rafters and really smart.

UPDATE [12:45 PM Eastern, December 9, 2017]: The initial version of this story included two Tweets that have since been deleted by their authors. One picture included a green arrow that claimed to point to President Trump. Further video evidence show that it was not.

Additionally, we must clarify that further video evidence shows a larger crowd, though no photos have yet emerged showing a "packed" crowd.

To provide fuller context, we have included video below. The upper deck behind the stage is not full in any of the photos.

For instance, this video shows a fuller crowd, but still shows a largely empty upper seating section behind the stage.