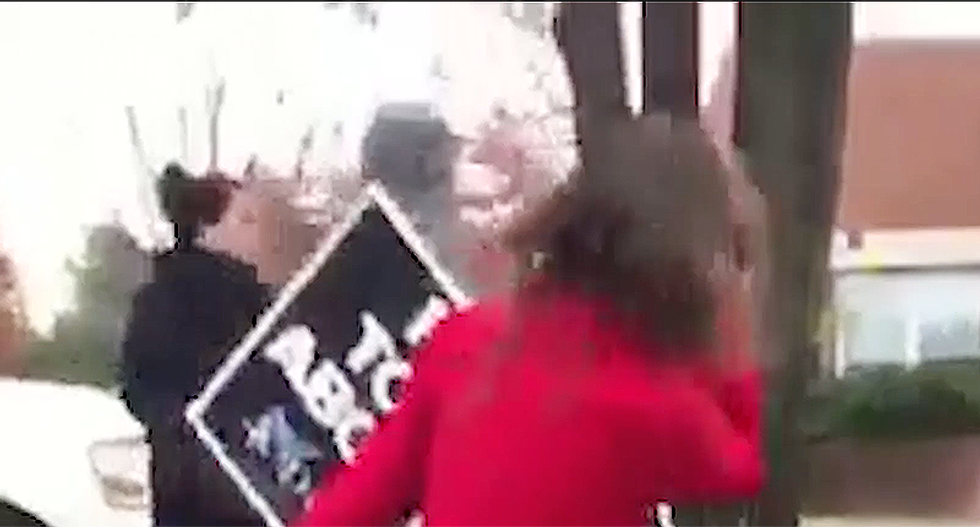 A dispute erupted at a Virginia Planned Parenthood Monday afternoon and a video of the confrontation has since gone viral.

Four volunteers for Students for Life, an anti-choice organization for young people, were protesting outside of the clinic. The video shows a woman walking up to the protesters and one of them is hit. The girl takes several steps back, spins and falls, according to WDBJ7.

The video doesn't show how the incident began or any other part of the altercation, only the 24 seconds of the woman approaching and the protester falling. A "slap" can be heard in the video but cannot be seen.

"There really are attempts to shut down free-speech and peaceful conversations, so we certainly do encourage our students to tape -- partly for their protection -- when things happen," the organization's spokesperson, Kristi Hamrick, told the network. She claimed the teen was treated for a minor concussion.

Anti-choice groups are known for attempting to intimidate or shame women outside of clinics. Operation Rescue, a radical anti-choice hate group, films those going in and out of clinics and posts them online with identifying information about the people. A donor to the group was convicted of shooting and killing clinic physician, Dr. George Tiller, in 2006 while he greeted members of his church in the lobby. Operation Rescue claimed they didn't know assassin Scott Roeder, however, the man claimed he was a donor to the organization's president Troy Newman.

"Well, my gosh. I've got probably a thousand dollars worth of receipts, at least, from the money I've donated to him," Roeder told the Wichita Eagle in 2009.

Planned Parenthood said the woman on the tape isn't employed by the clinic and the act happened off of their property.

“Planned Parenthood adheres to a strict non-engagement policy in the presence of members of the opposition," the organization said in a statement. "Consistent with that policy, the person involved in the December 2nd incident was not a Planned Parenthood staff member. Oppositional protests are designed to intimidate the many patients who seek basic health care services from Planned Parenthood. The health and safety of our patients and staff is our top priority, and Planned Parenthood has strong security measures in place to ensure that our health centers are safe, supportive and welcoming environments for all people to get the high-quality health care they need.”

Roanoke Police are investigating the incident.