WATCH: Houston quarterback has seizure from blow to the head -- then gets back in game after 5 minutes 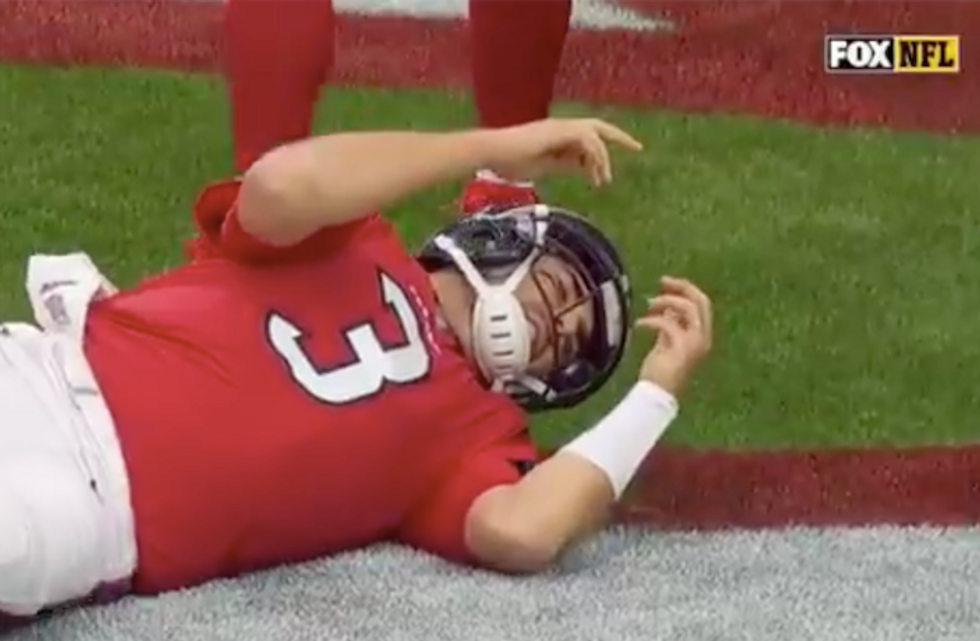 Amid concerns that U.S. football is dangerous to athletes and poses serious risks of concussion and brain damage, Houston Texans quarterback Tom Savage appeared to undergo a brain injury on Sunday, then join the game again only minutes later.

SBNation.com said, "Savage took a hit from Elvis Dumervil that left him stiff and shaking on the ground. He would be taken to the injury tent to be evaluated. On the Texans’ next possession, Savage came back out onto the field without missing game time."

While on the ground, Savage displayed what is known as the "fencing response," a key sign of brain injury. It is "an unusual and unnatural looking position of the arms adopted by individuals when suffering a concussion. Here, immediately following moderate forces affecting the brain stem of the individual, the forearms are held awkwardly, with one in a flexed position, and the other extended up into the air lasting a few seconds following the impact."

"After Savage was pulled, he tried to go on to the field and had to be forced back to the sideline and be ushered to the locker room. He said last week there's no way he's coming off the field on his own. Obviously, he wasn't happy, but the Texans made the correct decision." said commentator John McClain.

Suicides of longtime players, urgent medical warnings from health professionals and a pattern of cover-ups and willful ignorance about the issue have led some to call for the sport to be banned altogether. Some, like former college linebacker Marc Buoniconti -- who was paralyzed from the shoulders down after a violent hit during a game -- have called for youth football to be banned at the very least.

"It's just my opinion that children playing football, continually hitting their head, whether it is concussion or repetitive hitting, is detrimental to their health," Buoniconti told USA Today earlier this year.