'We must cause some righteous trouble’: Black minister rips white Evangelicals for ‘systemic poverty’ and voter suppression 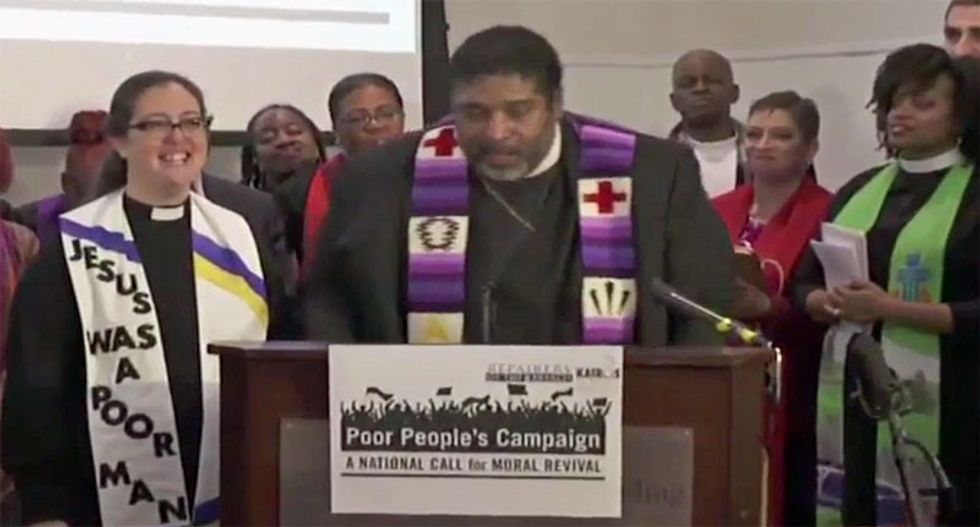 Rev. Dr. William Barber, the civil rights leader who started the Moral Monday movement at the North Carolina legislature, is taking the activism nationwide under the banner of "The Poor People's Campaign: A National Call for Moral Revival." The effort is a relaunching of the "Poor People's Campaign" that was started in 1968 by the Rev. Dr. Martin Luther King Jr and cut short by his assassination.

"Half a century later, the conditions that motivated the 1968 Poor People’s Campaign have only worsened, making the need for a new moral movement more urgent than ever," Barber co-wrote with Rev Dr Liz Theoharis in a new column for The Guardian.

The column examined the links between poverty, voter suppression, and political control by white evangelicals.

"The states with the highest poverty rates are in the south. And those same states have the highest rates of voter suppression of black people. Through this racialized voter suppression, politicians who support policies that hurt the poor get elected," the two moral leaders explained.

"So-called white evangelicals are omnipresent in the poorest areas of our country, and they say the least about systemic poverty, which is the foremost issue in authentic Christian religious theology," they argued. "After our denominations splintered over the moral question of slavery and the nation stood on the brink of civil war, Frederick Douglas said, 'Between the christianity of this land and the christianity of Christ, I recognize the widest possible difference.'”

"This is not Christianity. Rather, it is an extreme Republican religionism that stands by party and regressive policy no matter what. It's not the gospel of Christ, but a gospel of greed. It is the religion of racism and lies, not the religion of redemption and love," Barber wrote for NBC News.

"There is nothing Christian about the policies Moore has supported. They are as immoral as the terrible abuse he so vehemently denies. While he wants to compare his plight to the suffering of Jesus, there is no biblical basis for policies that hurt poor people and children," Barber continued.

"National Republican leaders who claim the moral high ground while renouncing Moore now are like the Republicans who spoke out against white supremacy after Charlottesville, condemning the 'hate' but never repenting of white nationalist policy," Barber noted. "Their moral outrage rings hollow because it renounces Moore based on his personal patterns but says nothing about the disturbing pattern of his policy agenda."