'We were promised collusion': Kellyanne Conway says Flynn was charged with lying so it's not about Russia 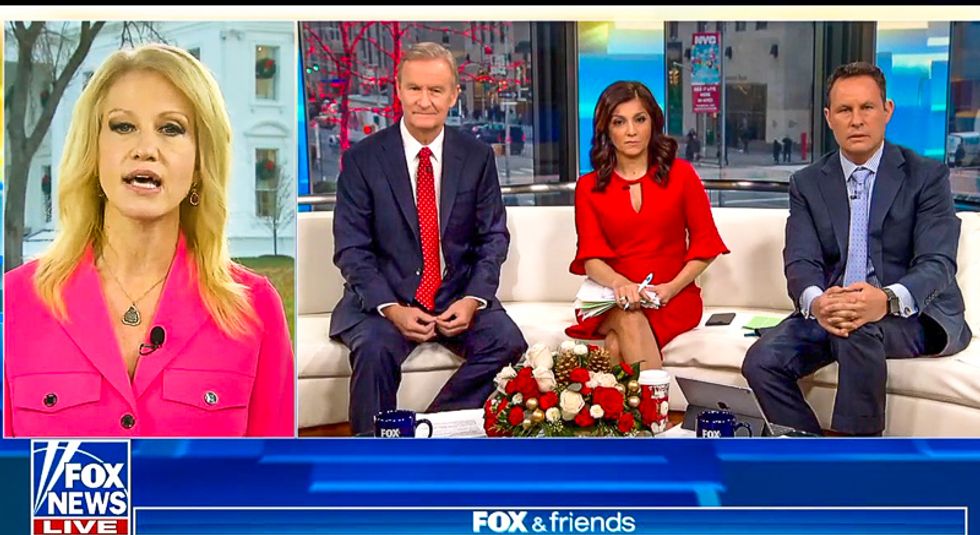 White House counselor to the president Kellyanne Conway on Monday suggested that Special Counsel Robert Mueller was veering from his mandate of investigating Russian interference in the U.S. election because former National Security Adviser Michael Flynn had been charged with lying to the FBI instead of "collusion."

While appearing on Fox & Friends, host Brian Kilmeade noted that attorney John Dowd had taken credit for one of the president's tweets which claimed Trump had fired Flynn because he lied to the FBI. Up until that point, Trump had said that Flynn was ousted for misleading Vice President Mike Pence about his contacts with Russians.

Some experts have said that the president openly admitted obstructing justice in the tweet.

"The lawyers are the ones that understand how to put those tweets together," she insisted. "I was with the president on Saturday -- all day, frankly -- and I know that what Mr. Dowd said was correct, that he put it together."

"I went back and reviewed the whole testimony of [former acting Attorney General Sally Yates]... she makes very clear in sworn testimony what she did say and what she didn't say [about Michael Flynn] to the White House counsel," Conway added. "Remember, we were promised collusion from the campaign, we were promised that those 70,000 votes in those three states were all because of Russia, Russia, Russia. And now, they are going in other directions."

She concluded: "This president says that it's a shame that anybody lies to the FBI and that there's no collusion."