'What are they going to impeach him on?' Clueless ex-Trump official asks mindless question and Fox hosts agree 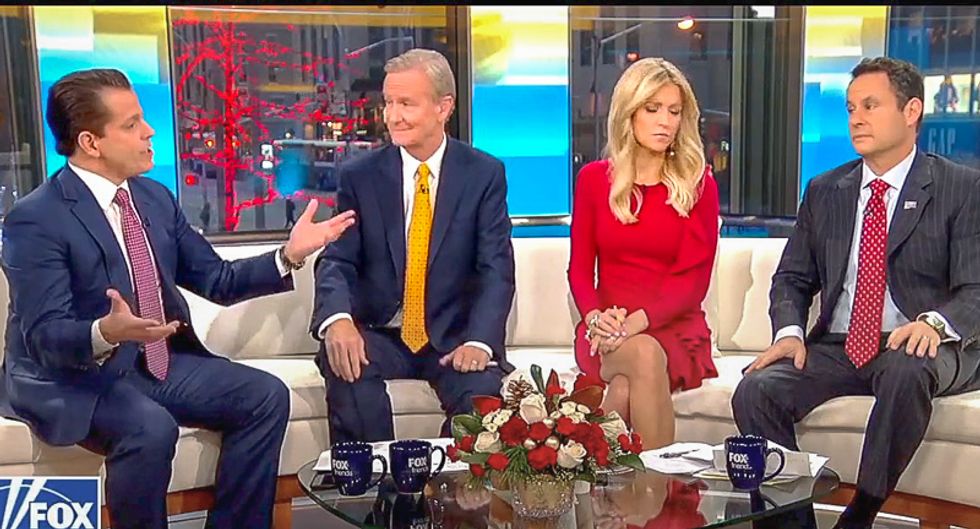 Former White House Communications Director Anthony Scaramucci and the of hosts of Fox & Friends agreed on Monday that it would be impossible to impeach President Donald Trump unless Democrats whip up false charges.

During a Monday morning segment about how Republicans could be facing losses in the midterms, Scaramucci predicted Trump would use his "great salesmanship" to convince Americans to vote for GOP candidates.

"They're going to go right for impeachment?" Scaramucci replied, sounding slightly annoyed. "What are they going to impeach him on?"

"That doesn't stop them!" Kilmeade complained. "They're still voting on a daily basis."

"That's the whole thing!" Scaramucci shrugged, suggesting that he was not aware of allegations against the president, including obstruction of justice and violations of the Constitution's Emoluments Clause.

"My point is that at some point, through good communication and through awareness, we've got to get it out to the American people," Scaramucci opined. "What are you going to impeach the guy on? He hasn't done anything other than..."

The former Trump official stopped himself before completing his thought.

"I say this to my liberal friends," Scaramucci continued. "Tell me the policy the president has put in place in the last 10-11 months that has been so objectionable to you? You can't find one. You can't find one!"