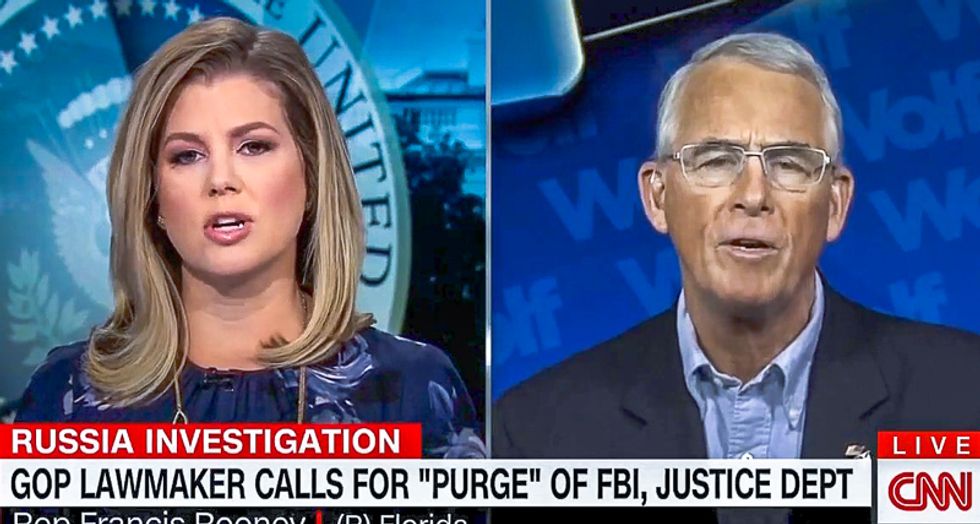 Rep. Francis Rooney (R-FL) followed up his demand for a "purge" of FBI agents this week by including low-level paralegals and assistance who might be part of his alleged "deep state" conspiracy against President Donald Trump.

In an MSNBC interview on Tuesday, Rooney first floated the idea of a "purge" at the the FBI and Department of Justice as the solution to President Donald Trump's dissatisfaction with the investigation into Russia's interference in the U.S. election.

"I'm very concerned that the DOJ and the FBI, whether you want to call it 'deep state' or what, are kind of off the rails," Rooney said at the time.

The congressman doubled down on Wednesday during an interview with CNN's Brianna Keilar.

"You said you were worried, obviously, that this is not an impartial investigation," Keilar noted. "Where is the evidence that this is somehow compromised by individuals' politics?"

Rooney pointed to donations made by DOJ employees to Democrats as his proof that the investigation had been corrupted.

But Keilar stopped the congressman for wrongly suggesting that all DOJ employees working on the Russia investigation had given more money to Democrats than Republicans.

"You're putting it in a dollar figure which makes it seem like it's the vast majority [of employees]," Keilar noted. "But actually there's 15 members of the [investigative] team of lawyers and this is just the lawyers side just so we're clear on that."

Keiler said that of those 15 lawyers, nine had given to the Democratic Party.

"That's a good point," Rooney conceded before expanding his call for a purge. "We should look at the totality of all the paralegals and FBI people and investigators and find out exactly how many people as well as dollars."