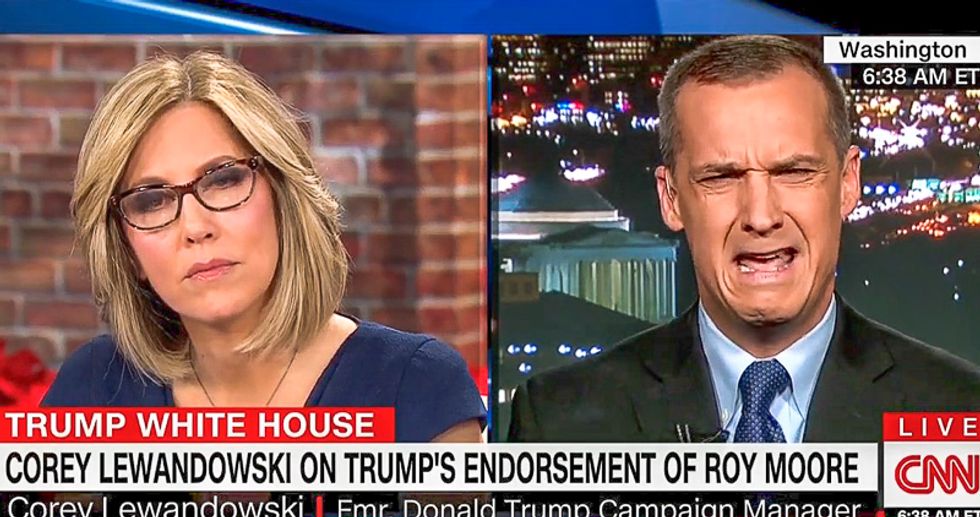 During an interview on CNN's New Day, Camerota asked the former Trump campaign manager if the president had done the right thing by endorsing Moore despite the sexual misconduct allegations.

Lewandowski assured her that Trump had made the right decision for Republicans.

"It's a binary choice in Alabama," he said. "It's not like there are two conservatives in the race."

Camerota replied: "But you do seem to be glossing over a little bit of the history of eight women coming forward against Roy Moore, making accusations that he -- in the case of two -- assaulted them. They were teenagers, one of whom who was 14."

"Yesterday, you called Al Franken a pig," the CNN host noted. "Is Roy Moore a pig?"

"I see," Camerota interrupted. "So, if you take responsibility and you apologize then you're a pig?"

"Your colleague refused to even acknowledge that groping those women was a disgusting thing," Lewandowski said, trying to change the subject.

"What!" Camerota exclaimed. "You don't think that [Chris Cuomo] is against groping women? Of course he is. Come one."

"Hold on a second, Corey," the CNN host said as Lewandowski ranted. "What do you call assaulting a woman behind a shopping mall when she was 16 years old?"

"The difference is one is accused of it, one has admitted to it," Lewandowski quipped.

"So in other words, if you take responsibility, you should have the book thrown at you," Camerota said, paraphrasing the Trump ally. "If you say the women are lying, you're willing to go with them."

"Why is it that you believe the Al Franken accusers but you don't believe the Roy Moore accusers?" the CNN host asked.

"That's not what I said?" Lewandowski replied.

"Then why isn't Roy Moore a pig in your mind?" Camerota pressed.

Lewandowski agreed that Moore would be a "disgusting animal" with "no right to serve in the U.S. Senate" if the accusations are true.

"But you don't believe the accusers?" Camerota observed.

"That's not what I said," Lewandowski snapped. "What Roy Moore has to do is he has to answer to the voters. And what Al Franken needs to do... is resign from the U.S. Senate because another accuser, his eighty one, came out yesterday."